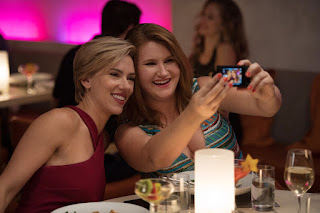 Director Lucia Aniello co-wrote this film with her boyfriend Paul W. Downs. Both Aniello and Downs are writers on the TV series Broad City. Downs is also an actor on the show and Aniello is a director there. Broad City began as a web series in 2009, created by Ilana Glazer and Abbi Jacobson. Comedy Central picked it up in 2014 and the show is now in its 4th season. The show is critically acclaimed and is described as a lighter and wackier version of HBO's Girls. The show is about female friendship, sex and sexuality. Essentially, that's what this movie is. It's Broad City infused into this crime-comedy feature that draws a lot of comparisons to Very Bad Things (1998).

The plot of this movie is essentially the same as that 1998 film. Like Ghostbusters (2016), this is an all-female remake of that Peter Berg debut. Only, this movie doesn't go anywhere near the dark and quite frankly, evil place that Berg's film does. This movie isn't on that level of black humor. It doesn't even go into the kind of absurdism of Let's Kill Ward's Wife (2015), which also is a comedy about people standing over a corpse debating about how to cover it up. This movie tries to be somewhere in the middle, comedy-wise, but it doesn't quite work, especially since the crime at hand is a murder of which the perpetrators face no real consequences.

Scarlett Johansson (Lost in Translation and Vicky Cristina Barcelona) stars as Jessica Thayer, a woman running for a political office, possibly a state senate seat. She's engaged to be married. Her best friend since college is organizing her bachelorette party. She and her best friend, as well as three other, female friends stay in a huge, beach home in Miami. They go out drinking, dancing and doing drugs. They even hire a stripper.

Jillian Bell (22 Jump Street and Office Christmas Party) co-stars as Alice, the best friend who is the female equivalent to a frat boy. She just wants to get intoxicated and embrace her horniness, including a foot fetish. She works as a teacher but is accused of monopolizing Jessica's time with nonsense. This is never depicted as well as it could have been in the flashback that precedes the main narrative. When Jessica's new friend from Australia arrives, a rivalry develops with Alice that called back to Bridesmaids (2011), but it's nowhere near as well done as the rivalry between Kristen Wiig and Rose Byrne.

Kate McKinnon (Saturday Night Live and Ghostbusters) also co-stars as Pippa, the aforementioned new friend from Australia. There's a great bit that introduces her character and the so-called rivalry with Alice. That bit involves kiwis and her luggage, but arguably after that, Pippa just disappears into the background. McKinnon isn't given that much to do and isn't used as well as the Emmy-winner could have been. 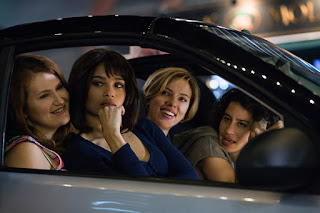 Zoë Kravitz (X-Men: First Class and Mad Max: Fury Road) plays Blair, a black woman who works in real estate. She's given one bit to play and that's a ménage à trois with the horny neighbors that's not as funny. Her role would have been more interesting if it had been swapped with Alice in two instances. Alice is the one who accidentally kills the stripper. Instead, Alice should have been the one to do the ménage à trois, if only because it would have been great to see a woman with Bell's body-type get a sex scene. Therefore, Blair should have been the one to kill the stripper and be this black woman potentially dealing with the criminal justice system.

The movie references the Marissa Alexander case in Florida, a cause célèbre in the Black Lives Matter movement, especially in light of the Trayvon Martin death in 2012. Kravitz's character mentions it, but if she were more directly responsible for killing the stripper and had to deal with the fallout more in racial tones, this movie would have felt more relevant.

Regardless, the stripper's death is treated in a way that ultimately lets Alice and all the women off the hook for murdering him and covering it up. There are no consequences at all. I'm not arguing they should go to prison, but to have a murder be a throwaway thing feels wrong unless you have the guy who died be an absolute monster, which this movie doesn't make out to be.

Another recent property that has women dealing with a corpse and one of the women having killed a man is Season 5 of Orange is the New Black. This movie takes place all in one evening. Season 5 of that Netflix series takes place over two nights. Obviously, the series has more breathing room, but it doesn't cop out when it comes to levying consequences on its characters, particularly the one woman who was the so-called killer, but it's not without its empathy and sympathy. 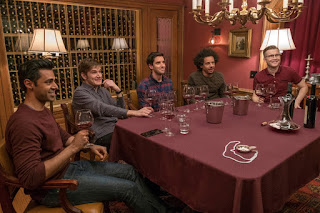 Paul W. Downs plays Peter, the fiancé of Jessica. A good third of the movie is devoted to following him. He's given more comedic bits than Ilana Glazer who is the fifth woman in the cast and it feels unfair to some degree, including a moment where he comes to the rescue. In the wake of Wonder Woman, which opened in theaters earlier this month, Peter's so-called rescue deflated the ra-ra sisterhood and the female empowerment of it all.

Colton Haynes (Teen Wolf and Arrow) plays Scotty, a guy who literally only exists for the women to ogle because pretty much all of his screen time is in nothing but a thong. He's practically naked the entire time. Body-wise, he's a poor man's Zac Efron but is still eye-candy nonetheless. Season 5 of Orange is the New Black had its eye-candy. John Palladino spends the majority of his screen time in nothing but his underwear too and he certainly is the season's sexy stud, but he was also more of a functional character than Haynes is here.