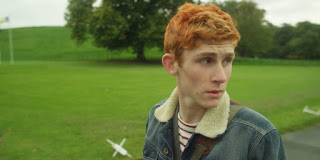 Plenty of films have dealt with boys in boarding school. The best of such has been Tom Brown's Schooldays, which inspired the creation of Harry Potter. The 2005 movie about Tom Brown was pretty fantastic and arguably charged with more homo-eroticism than even this film. It is weird that two boys who perhaps aren't gay display more romance between them than the two teenage boys here who actually are gay. However, Irish filmmaker John Butler's all-boy college tale isn't a romance. It's refreshing in that sense. It breaks the stereotype that a movie about two homosexual men has to be about them getting together or not. They don't kiss. They certainly don't have sex with each other. They can just be two gay friends.

The school in Tom Brown's Schooldays was called Rugby School, but the titular character only played the actual sport of rugby once. His preferred game was instead cricket. Here, on the other hand, rugby is the favorite thing. The first time we see rugby though is when Butler is using it to show how aggressive, violent and obviously very masculine one player is. That player expresses his dominance by beating another guy's face into a bloody pulp.

It sets the stage for a movie about homophobia in sport. The idea is that gay men are weak, the opposite of dominant and masculine, so in order to prove oneself, one has to be almost like a fierce warrior. The antagonist-in-chief is a vile coach who equates rugby players to soldiers on a battlefield, not an original concept, but he's such a rank advocate of no empathy and no art in a boy's life. Again, the idea is that gay men are empathetic and stereotypically all about art, so a real man, especially a real athlete can't be that.

The pilot episode of Glee spoofed this concept. In Glee, the spoof had the head coach battling the Spanish teacher. Here, the struggle between art and sport comes in the form of the rugby coach essentially battling the English teacher. The coach pushes for the main boy to focus on his physicality, while his teacher pushes for the boy to focus on things like literature and music. It climaxes on a night where the boy has to choose between an important match and a crucial talent show.

While the movie does a good job of letting us know where the coach and teacher stand, as well as the boy in question, unlike Tom Brown's Schooldays, it doesn't paint a full enough picture of the school itself or the other boys on the team. In the beginning, all the boys in the school seem fine with bullying aimed at a gay kid, but at a point in the end when all the boys literally switch sides, it feels out of nowhere as if the movie didn't spend enough time with them.

This is a shame because young, Irish actor Jay Duffy is in the cast. If anyone has seen Duffy's incredible performance in Channel 4's Hollyoaks back in 2012, then you know he's a terrific up-and-coming actor. Here, Duffy plays Victor, the captain of the rugby team. Victor seems to be crucial at the beginning of the film but virtually disappears by the end.

The movie is topical given that it was made in the wake of Keegan Hirst coming out as gay in 2015 and being currently the only male rugby player to be openly gay. It also might be topical to American LGBT audiences who have been following the recent incident on CBS' Survivor. Namely, there was a huge backlash against a gay man who outs another LGBT person as a form of retribution or to be hurtful because the same happens here. 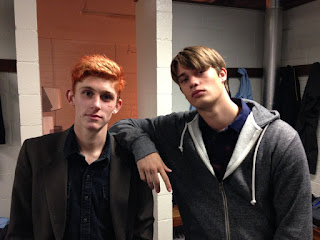 Fionn O'Shea plays Ned Roache, the 16-year-old who definitely wins the most-adorable-redhead-in-Ireland award, regardless if his hair is naturally red. Ned likes to sing and play guitar but his musical aspirations take a back seat. Nicholas Galitzine plays Conor Masters, the rugby athlete who hogs the spotlight. Ned and Conor became roommates in Wood Hill College and quickly find themselves as friends despite being on opposite sides of the art and sport debate.

Andrew Scott (Pride and Sherlock) co-stars as Dan Sherry, the English and music teacher to both Ned and Conor. At first, he's a very inspirational instructor, much in the vein of Robin Williams in Dead Poets Society. Things change when he realizes Conor is gay. An interesting conversation progresses where Conor questions if he should come out or not. It's compelling because the so-called inspirational and progressive teacher argues for him to stay in the closet. Scott is such a good actor that he makes that argument believable and not in a fearful way, even though Dan becomes the most terrified. Scott's performance dances between scared and strong, and it is probably the best thing about this movie.