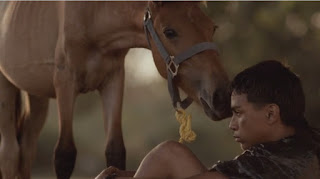 Angel Manuel Soto directed a 30-minute short film called El Gallo in 2012 about a child boxer being trained in rural Puerto Rico. That short film is the cornerstone of the triptych feature that Soto has crafted here. There is no overall plot. Soto is merely trying to paint a picture of Barrio La Esperanza, a neighborhood that seems impoverished, and Soto really depicts the dirt, the grime, the heat and the sweat of that neighborhood, along with the blood. He conveys a truly oppressive place that feels the opposite of its name. Esperanza is Spanish for hope, but, by the end of Soto's film, hope isn't the emotion that lingers. What lingers is despair. 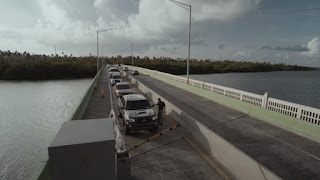 Also unlike Amores Perros, Soto doesn't pivot around a single incident. The three story lines do converge, but it isn't the pivot. Here, each of the three stories are almost isolated. Yet, this isn't an anthology. The three stories are loosely connected in terms of character-interactions. There is a stronger through-line about the drug trade and how it can endanger and destroy lives, and clearly Soto is very much concerned about this drug trade and the effect it's having on this neighborhood in Puerto Rico, which is also Soto's home country.

Soto delineates each story line by naming every one after a farm animal. The first is "La Gallina" or the hen, a mothering bird, and Soto's opening salvo centers on a woman who desperately wants to be a mother herself but she isn't for some reason. She instead works at a hospital's maternity ward, delivering babies. She reaches her limit when she sees a drug-addicted, pregnant woman nearly lose her and her baby's life due to a heroin overdose.

The second story is the aforementioned "El Gallo" or the rooster, which is a fighting bird. Soto's image of the ring where the roosters battle is almost reminiscent of the dog-fighting ring in Amores Perros. Unlike Amores Perros though, the fighting animals here are a metaphor for the true horror, which is prepubescent teens, possibly between 10 and 14, who engage in cock fights not dissimilar from the animal brawls we see in both films. 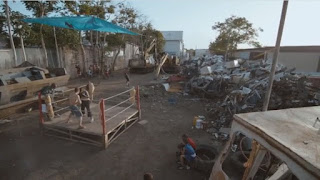 If not for that horror, which Soto teases at the top, this second story could play as a teen, Puerto Rican version of Rocky (1976). It's mainly, dialogue-free training of this pre-teen boy named Santito in the ways of boxing. The young actor who plays Santito, José Colón, is mostly wordless, but he gives a ferocious performance. He's small but projects or perhaps through Soto's camerawork appears huge. You forget in instances that he's even a child.

The third story is "La Mula" or the mule. It focuses on another, young boy, an overweight teen named Lucho who is quickly revealed to work for the same, ruthless kingpin involved in Santito's story. That plot is tangential here. What's more compelling is the subtle queer elements Soto infuses. Soto teases cross-dressing and same-sex attraction where Lucho's gaze seems more transfixed to the sometimes naked or half-naked, sexy young man named Bryan who Soto's camera certainly loves.

Those elements though are abandoned for an Amores Perros-like convergence that isn't as emotionally striking as the literal knockout revelation in "El Gallo" because you come to care more about Santito than you do Lucho, but it's still compelling in its own right.

Not Rated but contains graphic nudity and brutal violence against children.
Running Time: 1 hr. and 41 mins.

Playing at Laemmle Monica Film Center.
Available on DVD and VOD on June 20.