The second shot in this film by Daniel Espinoza, the Swedish director of Easy Money (2012) and Safe House (2012), is one-long, continuous take that is reminiscent of the opening, long, continuous take in Alfonso Cuarón's Gravity, which this movie unfortunately invokes not just in the beginning but throughout and especially at the end. Cuarón didn't invent this technique. A recent horror film, The Conjuring (2013) also used a long, continuous take to establish the geography of its isolated environment. Except, this movie wants to have the opposite feeling of those two thrillers. Instead of triumph, Espinoza's film wants the audience to feel failure. Instead of exhilaration and hope, Espinoza's film wants you to feel dejection and futility. Mostly, he wants you to feel terror, which a good, horror movie should do. A little relief at the end is often assumed and warranted, but that's not the case here.

Cuarón's film isn't the only one that this movie invokes. Given that this movie is about a group of people trapped in space, trying to survive a killer monster also trapped in space, one can't help but think of Ridley Scott's Alien. Even the behavior of the monster at times is very much a rip-off of the H. R. Giger creation. It's not a rip-off of Giger's look. The creature here starts off appearing as a kind of a starfish before growing to become more like a squid. It's white in color instead of Giger's traditional black. Yet, there are some behavioral aspects that are similar. The method by which the monster kills its first human is very reminiscent of the so-called facehugger and chestburster.

Written by Paul Wernick and Rhett Reese, the writing duo for Zombieland (2009) and Deadpool (2016), this movie doesn't take on the tone of those two films. This isn't a comedy with horror or action elements sprinkled. Ryan Reynolds (Safe House and Deadpool) does provide some humor at the beginning but quickly this turns into a serious, scary movie. It's arguably just as scary and thrilling as Alien. Fortunately, the writers don't have the scientists make decisions that seem stupid, which has been the constant criticism of the recent Alien sequels like Prometheus (2012) and Alien: Covenant, which actually was theatrically released after this film but ended up being worse.

Of course, there is the one character who makes one or two stupid decisions that feel contrived in order to move the plot along or provide a jump scare or two. Other than that, the characters behave reasonably well. The characters are developed reasonably well, given the situation. More would have been appreciated but I don't begrudge it for what it does or how it does it. That being said, Jake Gyllenhaal (Brokeback Mountain and Zodiac) stars as David Jordan, the chief medical officer who has spent 473 days in space, longer than anyone else. He apparently prefers life in space as opposed to life on Earth. That could have been explicated a little more. 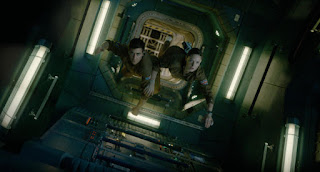 Rounding out the cast is Rebecca Ferguson (Mission: Impossible - Rogue Nation and The Girl on the Train) who plays Miranda North, the head of security, Ariyon Bakare (Doctors and Tyrant) who plays Hugh Derry, the lead biologist, and Hiroyuki Sanada (The Wolverine and Sunshine) who plays Sho Murakami, the Japanese engineer with a newborn daughter on Earth. The cast is diverse and great and works very well here. However, Sunshine is a better space film than this. This is simply a well-done B-movie.