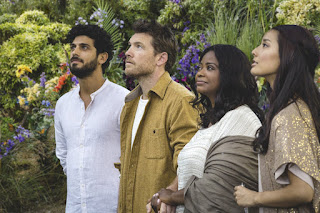 This is an adaptation of a best-selling novel by William P. Young, a Canadian author and obviously when doing an adaptation, the instinct is to be faithful and dutifully recreate what's in the pages, and seemingly that's what writers John Fusco, Andrew Lanham and Destin Daniel Cretton did. Director Stuart Hazeldine shepherds the whole thing dutifully with the potential of delivering something with as much pizzazz as Victor Fleming's The Wizard of Oz but instead hands over a film less aesthetically engaging than crafts from 1939. The aesthetics are arguably the only things of which Hazeldine had control. The story and dialogue were probably as set in stone as the Ten Commandments, so instead of intelligent conversation where issues are truly examined or debated, all we get is feel-good pablum, as well as drivel and platitudes that Christians use to circumvent logical gaps rather than actually fill them.

In essence, this movie exists in the same realm as Christian apologetics, which spawned such books and Pure Flix films as God's Not Dead and The Case for Christ. Yet, it's obvious that the main character is nothing but a puppet whose strings are easily pulled. This man isn't even on the level of someone like Lee Strobel, and what's most frustrating is the protagonist's questions and outlook are myopic and rather narrow, even in the face of such a huge and wide situation. It's not so unreasonable given his emotional and mental state, but it's the same emotional and mental state as Will Smith's character in Collateral Beauty (2016), but Smith's character was able to make cogent arguments.

In fact, the premise, structure and goal of Hazeldine's movie is practically an exact copy of Collateral Beauty. That Will Smith picture is about a father dealing with the death of his daughter. Three supernatural beings who look human enter his life to advise him and try to heal his broken heart and soul. Those three beings were played by Helen Mirren, Keira Knightley and Jacob Lattimore. Here, instead of Will Smith, Hazeldine gives us Sam Worthington (Avatar and The Debt), and his three confidants are Octavia Spencer (The Help and Hidden Figures), Aviv Alush and Sumire.

Octavia Spencer, the Oscar-nominated actress, plays the Father, aka "Papa." Aviv Alush, an Israeli actor, plays the Son, aka "Jesus," and Sumire, a Japanese actress, plays the Holy Ghost, aka "Sarayu." Instead of just visiting him on the street, they invite him to a cabin, a beautiful, warm, well-decorated, lakeside cabin. There, they have group and individual conversations about God and the relationship to man.

Because this is Christian apologetics, the bottom line of those conversations is trying to provide an answer to the age-old question of why does God allow bad things to happen. The bad thing in this movie is the brutal murder of a little girl who's probably no older than 6 or 7. This little girl is the youngest daughter of Mackenzie "Mack" Phillips, played by Sam Worthington.

When Mack realizes he's talking to God, after not enough skepticism, he makes it known that he blames God for his daughter's death. What follows are conversations and quasi-debates about why God isn't to blame and why Mack should forgive, move on and only love. Unfortunately, these debates only set up straw-man arguments that are just as easy to knock down as the Scarecrow in The Wizard of Oz. One particular straw-man involves a Sophie's choice that was a bit ridiculous.

But, the last time I saw a black person play God, it was Morgan Freeman in Bruce Almighty (2003). It was nice to see Octavia Spencer, a black woman, play God. Her character is very open and approachable. Mack, despite his anger and sadness, is quite polite and soft-spoken, never even raising his voice. Supposedly, Mack spends a whole weekend with God, but, in all that time, he never asks any really challenging questions.

Some questions came to mind that Mack never brought up. For example, what is God's stance on homosexuality? Is it a choice? Is it sin? What does God think of Roe v. Wade? Is there life on any other planets? Did you visit Joseph Smith in the early 19th century? What was up with the dinosaurs? Those are just some questions off the top of my head. If I had a whole weekend with God like Mack, I could come up with more. Yet, Mack doesn't come up with any.

It's not that I think that a movie where a man talks to a heavenly creature like God himself, a spirit or any angel has to ask those questions. I didn't expect that from Bruce Almighty. The tone and the objective of that movie were such that those kinds of questions didn't matter. The tone and objective here are such that this man is supposed to challenge God, except he doesn't. He's just a Trojan horse meant to reaffirm Christian doctrine. 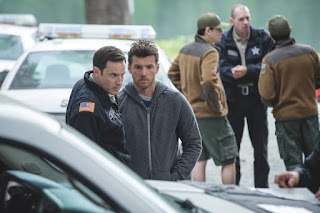 This kind of evangelism wouldn't be bothersome, if the film were effective in other areas. The movie builds to a moment where Mack has to decide if he's going to forgive the man who viciously murdered his daughter. The problem is that forgiveness usually comes from understanding. Because we never meet the killer and hear why he did what he did, there's no understanding possible. A better example of a father learning to forgive the man who killed his child is Dead Man Walking (1995).

The final aspect that was a bit muddled was Mack's relationship with his father. There is a scene where Mack confronts the ghost of his father who looks like he emerges out of tall, corn crops. It was reminiscent of the final scene in Field of Dreams (1989), but nowhere near as effective. Adolf Hitler could have appeared to Mack and we're supposed to buy that he deserves a hug and forgiveness simply because he's dead. If one wants to watch a movie where a man talks to a heavenly creature, one is better off with the Hollywood classic, It's a Wonderful Life (1946).

Rated PG-13 for thematic material including some violence.
Running Time: 2 hrs. and 12 mins.