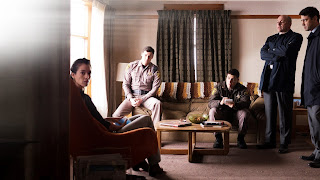 It's easy to say that this movie is a rip-off of Christopher Nolan's Memento (2000). It's a revenge drama where the narrative occurs in reverse, chronological order. This movie is more of a comedy than Nolan's drama, which had dark comedic moments, but writer-director Oren Uziel's feature embraces more wackiness like literal toilet humor. He tries to be in the vein of the Coen brothers, but Uziel doesn't quite hit the mark. While it's an interesting storytelling technique, basically telling the events backwards, it feels more like a gimmick here than when Nolan used it. It was of course a gimmick in Nolan's hands as well, but Nolan never lost sight that digging into his character was more important and that exploring the themes of grief and identity through memory was way more compelling than the plot.

Benjamin Walker (The Choice and Abraham Lincoln: Vampire Hunter) stars as Zeke Sikes, the sheriff of this small town. We follow him over the course of a week. The hitch is we start on Friday and go backwards to Monday. Instead of digging into Zeke as a character, the movie keeps him distant and aloof, which is purposeful so to have a big reveal at the end, but it's also a gamble because you run the risk of alienating him or having us not care for him.

By the end of Memento, we care about Guy Pearce's character. Even though he was doing something that was arguably despicable and horrible, you care for him. By the end of this movie, we don't care about Zeke.

Rainn Wilson (The Office and Backstrom) co-stars as Andy Sikes, the brother to Zeke who is on the run after committing a bank robbery. He's on the run from his own brother. Andy seems to have a tense relationship with his wife and daughter, which is never truly explained. For some reason, Zeke is the one guarding the bank. No explanation is given as to why. No explanation is given as to why Andy is robbing this bank when it's stated he already drives a Porsche.

There's a roster of other characters who are rather one-note and aren't explored. The majority of it is moving from plot point back to another. John Michael Higgins (A Mighty Wind and For Your Consideration) plays Brad Dawkins, a local judge who is secretly gay. He's the only character that I wanted to know more about but like the rest he is quickly and easily dispatched.