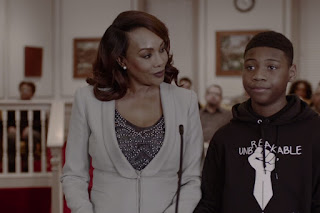 At the premiere, Tykeem and cast were photographed and interviewed by local press, including WBOC's Tom Lehman. A red carpet had been laid out for those involved with the film. Prior to the start of the film, the area of State Street in Dover where the Schwartz Center sits, between Loockerman and North Street, had been blocked off by police.

Once inside the Rollins Auditorium or main stage, which can seat 500 people, the orchestra floor, mezzanine and balcony were practically filled. It was clear the event was nearly sold out. A lot of friends and family of the cast were in attendance. When the movie started, every cast member's name that appeared on screen was met with loud cheers. After the movie, the director and cast got a standing ovation. Tykeem spoke on stage afterwards. He thanked the mayor, the city of Dover and the cast. He also was overjoyed that the audience had received his film well.

Tykeem made great use of Dover's City Hall and its brand new library back in January during a snow storm. The mayor of Dover even has a role, but Tykeem's story isn't set in Dover. It's set in a fictional, Delaware city that feels more akin to Philadelphia, which is Tykeem's home town and partially where he filmed. From the outset and based on the trailer, it's obvious this film is going to tackle the issue of Black Lives Matter.

Various TV shows have attempted to address the Black Lives Matter movement. None have been more direct than FOX's Shots Fired. That show was more complicated and saw the issue as more complicated than Tykeem's film. Tykeem centers this movie on a prepubescent teenager and looks at the problem presented by Black Lives Matter through the eyes of a child. Its simplistic view might be refreshing to most, but in reality the problem is too complex. Tykeem's film might be inspiring but it's also a bit naive. 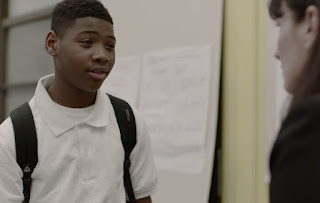 Jamol Manigault stars as Jason McKey, a 12-year-old black kid who decides to come up with a solution for the shootings of unarmed black people by police that has been the focus of Black Lives Matter. He's smart, earnest, dedicated and loving. He's a kid who is very concerned about what's going on. He's engaged and he's compassionate. He wants to present his solution to the city council and his uncle Tony, played by Nakia Dillard, assists him.

Vivica A. Fox (Independence Day and Soul Food) co-stars as Sammi Brooks, the city manager. According to the City of Dover's web site, the city manager coordinates the city government's activities but also coordinates public affairs, including receiving and responding to citizen's concerns. That is essentially Sammi's job. She receives and responds to Jason's concerns. She meets with Jason and hears his solution.

It's not until this movie's third act does Tykeem reveal what that solution actually is and what the specifics of it are. We just see Jason and Sammi dance around it until the end. For the first, two-thirds of this movie, Tykeem focuses a good chunk on the parents of a boy who was shot by police, which is this movie's inciting incident. Particular attention is put on the father, Troy James, played by Quinton Aaron (The Blind Side). Through him and the mother, Mattie James, played by Claudia Jordan (The Price is Right and The Real Housewives of Atlanta), we see grief and frustration about the problem.

Other than those two emotions, we don't get much insight on whom Troy and Mattie's son was. We strangely never see or hear from him. Tykeem provides a lot of voice-over narration from a child but not the child in question or even from Jason. Aside from one classroom scene that felt awkward, we never see Jason interacting with any other child, not the narrator or even the child who died.

This might be a spoiler, but in the last act of the movie we learn what Jason's solution is. His basic solution is that the city should get rid of all white police officers all together. The city council debates, but at no point does the movie address the legal or the logistical problems inherent in Jason's solution.

Sammi's argument, which Vivica A. Fox sells very well, is a bigoted and racist argument. She says that it's been white people who have done these shootings and killings therefore all white people must be removed or no longer allowed in the police force. That's like saying that Muslims did some killings so we're going to ban all Muslims from coming to the United States. Jason's solution is tantamount to Trump's travel ban.

Putting aside the lawsuits white people could file as a result, the logistics alone would also be a nightmare. If all the white people were eliminated or denied on the police force, there might not be enough officers to handle the city, especially if a true emergency broke out. Even with white people, many law enforcement agencies complain their officers are overworked and understaffed. If all the white people were removed entirely, that would only exacerbate those issues. Simply put, even if Jason's solution weren't bigoted, it would still be highly impractical.

Not Rated but for all audiences.