Movie Review - Land of Mine (Under sandet) 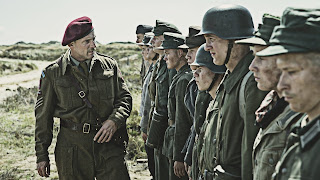 Nominated for Best Foreign Language Film at the 89th Academy Awards, it is the last of the five nominees to be released theatrically in the United States from this year's Oscars. It didn't win there, but the film is from Denmark where it was nominated for 13 Robert Awards, which are the Danish equivalent of the Academy Awards. It won five, including Best Film or Årets danske spillefilm. It also won three Bodil Awards, which are the prizes given by the Danish Film Critics Association.

Writer-director Martin Zandvliet has been winning Robert and Bodil Awards since his debut documentary, Angels of Brooklyn (2002). I didn't become aware of Zandvliet until his 2012 screenplay, directed by Mads Matthiesen, Teddy Bear, came to the U.S. via Film Movement. That movie was more of an individual, character study. This movie is less that and more of a insulated, situation study.

That situation is the immediate aftermath of World War II, May 1945 to be exact, and the tensions between the Danish and the Germans. During the war, Nazi Germany occupied Denmark, which resulted in thousands of Danish people dying. Once Denmark was liberated, the Nazis were expelled, but some Germans were held as prisoners of war. The Germans had placed millions of land mines along Denmark's coastline. After the war, Denmark decided to force the German prisoners to disarm those land mines.

Rolland Møller stars as Carl Rasmussen, a Danish sergeant who is assigned to oversee a group of those German prisoners and make sure they disarm and remove the land mines, which are basically circular bombs buried in the sand of a specific, Danish beach. It's said that that beach has about 42,000 bombs and it would take the group months to diffuse them all. Despite the inherent danger, Rasmussen is also a hateful and brutal taskmaster who keeps the dozen or so prisoners locked in a small shed with no food, no water and no medical care for all those months.

The arc of the film is Rasmussen realizing that his hatred of these young Germans and his brutality or torture of them aren't good or ultimately correct. It's obvious that Møller's hard man routine will eventually soften, if because only a true sadist could watch young men who are practically children be blown up doing what he wants and feel no sympathy.

Unfortunately, Zandvliet has 14 boys he has to juggle. That 14 does get whittled down to four, but Zandvliet doesn't do enough to distinguish them from one and another. I couldn't tell even the four remaining German boys apart. Sadly, when they started blowing up, I didn't care because we don't get to know them that well.