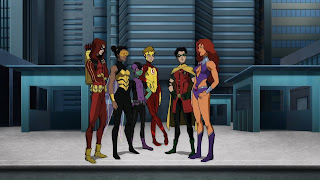 People might know that DC Comics has its signature character of Batman who went out and collected other super heroes like Superman, Flash, Wonder Woman and Aquaman to name a few to form the Justice League. I'm not sure when it started but DC Comics also has done teenager or younger versions of its iconic characters. The most well-known is Robin who originally was Dick Grayson, the adopted son of Bruce Wayne. Eventually, Dick Grayson grew up and became Nightwing, a hipper version of Batman, and he also went out and collected super heroes too but super heroes who were teenage or younger. Nightwing called his team-up the Teen Titans.

Nightwing has assembled six other characters. Starfire is an alien named Koriand'r who is not unlike Superman in that she can absorb solar energy to fly, have super strength and shoot laser bolts. Beast Boy is a human kid named Garfield Logan whose parents experimented on him making him look like a West African, green monkey but who gave him changeling powers to morph into any animal. Blue Beetle is Jaime Reyes, a Hispanic kid from Texas who bonded with a mystical scarab that attaches to Jaime's spine and surrounds him like body armor and provides protective weapons. Raven is half-human and half-demon who has various magical abilities. Tara is a girl whose origins are sketchy but she can control the ground, cause earthquakes or form mountains. Robin is now Damien Wayne, the biological son of Batman. Damien took the identity of Robin after Dick Grayson left it.

For an animated film about teenage characters and some who are even younger, there is a lot of adult things going on. Nightwing and Starfire are technically grown-up and at the beginning, they're deciding to get an apartment together and live with one another. There's of course murder and mayhem. Literally, there's a character named Mayhem, as well as a character named Brother Blood who bathes in his victim's red bodily fluid. Later, there's implied pedophilia, so this so-called cartoon is very mature and very serious despite the ages of its characters, which is almost the beauty of it. 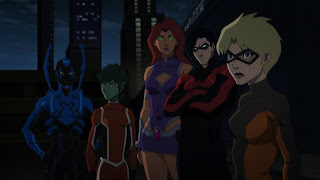 It is a sequel to some of the other animated movies from DC Comics and Warner Bros., but the movie does work by itself. Even if one doesn't know these characters, how they come together, or what the League of Assassins are, there is enough here to help you understand who they are, how they relate to one another and what they want. In that, it functions better than a lot of live-action films that have been released this year. The characters grapple with fear, jealousy and love in believable ways. Despite the supernatural and magical stuff swirling at the end, the movie gets the emotional beats right, and that's what's most important.

Rated PG -13 for language, some violence, sensuality and brief drug use.
Running Time: 1 hr. and 24 mins.