John Boyega is a movie star. The 26-year-old, British Nigerian actor is a bonafide movie star and he became one in less than five years of his debut in film. His meteoric rise was helped by his crucial role in Star Wars: The Force Awakens (2015). Obviously, this movie isn't being sold on Boyega's name alone. It's all about the CGI robots and monsters, but Boyega's placement in the center isn't inconsequential. Plus, his role marks a good trend for the first quarter, if not the first half of 2018. With this film, we've gotten a half-dozen, Hollywood releases, meaning movies produced by a major Hollywood studio and given a wide theater-count, that have had an African-American lead. Most of which have been action flicks with some being science-fiction. The biggest and most successful has been Black Panther.

The movie is a sequel to Guillermo del Toro's Pacific Rim (2013), which is basically about huge robots call Jaegers that fight huge monsters called kaiju. Kaiju is actually a term from Japanese cinema that goes all the way back to Godzilla (1954) and is a catch-all term for the kinds of movies that deal with Godzilla-type creatures wreaking havoc. Those movies were essentially horror films that dealt with fears about nuclear weapons and nuclear war.

Eventually, Japanese culture expanded the kaiju genre beyond horror into the realm of children's entertainment. A prime example is Japan's Super Sentai series, which became the basis for the Power Rangers series here in the United States. The series was about a group of young people who take control of huge robots to fight equally huge monsters, very much akin to kaiju.

Del Toro's 2013 film felt more like an original creation within that kaiju genre, but yet this film by Steven S. DeKnight feels so much like a rip-off of that Power Rangers series and even the recent 2017 film, which came out in theaters around this month last year. The problem though is that DeKnight's film spends even less time on character-development than that cheesy and a bit campy, Power Rangers film. What the movie lacks in characterization, it makes up for with robot battles, many of them, which was actually a deficiency in the recent Power Rangers film. If the robot battles are all one cares to see, then there are enough here to satisfy.

Boyega does play Jake Pentecost, the son of one of the robot pilots in the previous film who died. That dead father trope comes straight from the Stars Wars universe too, but Idris Elba played the now dead father and whatever charisma or appeal Elba had is perfectly transferred into Boyega here. Having a sequel be about the son of the former protagonist now dead is the same narrative trick that was pulled in Independence Day: Resurgence (2016), but only here it makes more sense and Boyega has immensely more gravitas than Jessie Usher in that 2016 bomb.

Jake starts out as a junkyard dog and Han Solo-type who at first resists joining in the military action but undoubting gets pulled in due to familial connections. Similar to the first Independence Day (1996), this movie is about patriotism and a little bit of American jingoism. This movie doesn't lean as much into rah-rah America, probably because Jake isn't American. This movie is more about globalization or global pluralism, people from all over the world working together for a common goal, a common defense. 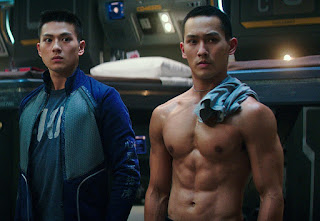 Jake is put in the middle of a group of military cadets training to operate Jaegers. Those cadets represent a diversity of people from various corners of the Earth. Most are Asian, but there's a Hispanic girl, a Ukrainian girl and an Indian boy. Unfortunately, the screenplay doesn't allow us to get to know any of these people with any real gravity that when they're in danger of losing their lives, it feels like not much more than video game characters losing their lives. Despite the Asian characters being abundant, they're the ones most in the background. This movie doesn't care about them and dispatches them very quickly.

Scott Eastwood (The Longest Ride and Suicide Squad) co-stars as Nate Lambert, the co-pilot of the Gipsy, the huge robot that Jake uses. Eastwood is basically playing his same character from The Fate of the Furious (2017). Cailee Spaeny also co-stars as Amara Namani, a fellow junkyard dog who builds her own Jaeger. She becomes a military cadet along with the others. Amara is also dealing with the fact that ten years ago, a kaiju attack killed her family.

When it comes to a John Boyega film about him fighting alien monsters, Attack the Block (2011) is still the best. People were also shipping Boyega's character with Oscar Isaac's in Star Wars: The Force Awakens. I would also ship Boyega with Eastwood here. Thoughts of that pairing fueled my interest in this film. The ridiculous robot battles are a fuel as well to which most people will probably cling because there's really not much else.