For the better part of a decade, the CW has mostly been programming fantasy or comic book dramas like everything Greg Berlanti or The Vampire Diaries. However, the CW used to be the WB and that defunct network broadcast down-to-Earth, earnest, family dramas or even personal dramas like 7th Heaven (1996), Gilmore Girls (2000) and Everwood (2002). The WB also did a ton of multi-camera sitcoms, but all of those went away when it became the CW. With this series, created by Erin Cardilo and Richard Keith, it feels like the network attempting to go back and give us one of those earnest, family dramas again.

Lucy Hale (Pretty Little Liars) stars as Stella Abbott, a twenty-something cancer survivor in Asheville, Oregon, who thought she had a terminal condition, which she's been facing along with her family for the past eight years. Then, all of a sudden, her doctor tells her she's no longer terminal, so the premise of the series is Stella and her family whose lives were supremely affected by the cancer now have to deal with all the things that were ignored or overlooked in lieu of dealing with the cancer.

This series doesn't have the faith or spirituality of 7th Heaven. It doesn't have the great comedic chops of Gilmore Girls, and it doesn't even have the gravitas of Everwood. It's almost dismissible, if not for one thing. Stella has a brother named Aiden, played by Jayson Blair (The New Normal), and a sister named Elizabeth or Lizzie, played by Brooke Lyons (2 Broke Girls). Both of whom are so dismissible. Lizzie is mostly a non-presence and Aiden is mainly comic relief but unneeded, except that somehow all shows feel like they need a good-looking, idiotic, man-child. 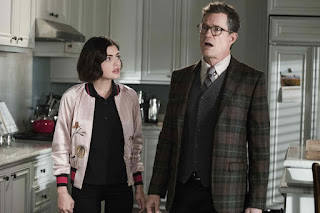 Dylan Walsh (Nip/Tuck and Unforgettable) plays Paul, the patriarch and college professor who realizes that he's in financial trouble because of Stella's health care but also with spoiling her to make her feel happy because he thought she might die. He's also realizing that his marriage is over. Gillian Vigman (The Hangover and Suburgatory) plays Ida, the matriarch and wife to Paul. She ends things with Paul as she reveals to be having a lesbian affair. It's kind of a reverse of Grace & Frankie on Netflix.

Oddly though, the most interesting thing here is still the women. Paul having to handle financial difficulties could be compelling or even him having to start over socially in his 50s. It depends on the road the show wants to travel with Paul. However, Ida has been very compelling. Her lesbian affair is a joke in the first, two episodes, but it has potential. Ida also has a great moment in the second episode where she explains her experience and point of view over the past eight years and it's an eye-opening moment. The show should dig into moments like that, but even that moment wasn't what hooked me. 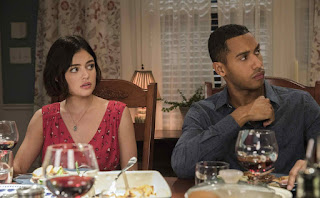 Elliot Knight (American Gothic and Once Upon a Time) co-stars as Wes Charles, a black British citizen whom Stella met in Paris and whom she married in a fast, whirlwind romance. It's like something out of a movie or fairy tale. Both play into it because they thought Stella was dying. Now that they know she's going to live, it does change things. The way this series has thus far depicted that dynamic between Stella and Wes has been endearing. It's also been very well-written and well-acted on both Knight and Hale's part. It's powerfully romantic and the hook that kept me coming back week-after-week. I will give this show a chance if just to see Knight and Hale together. My hope is that they do more interesting things with them. The third episode introduces a possible love triangle, so we'll see what happens with that.

Note: Another black British actor, Alfred Enoch, also plays a character named Wes in the ABC series How To Get Away With Murder. Just a coincidence I thought I should point out!