TV Review - Scandal: The Final Season / How To Get Away With Murder: Season 4 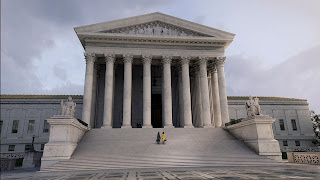 Recently, the TV series Scandal and How To Get Away With Murder did crossover episodes. It's notable because both shows are produced by Shonda Rhimes, probably the most powerful, African-American, female producer working in television today. Her company, known as Shondaland, oversees several programs on ABC. Scandal and How To Get Away With Murder are special in that both revolve around powerful, African-American female characters. The crossover episodes provided the opportunity to bring those two powerful, black women together. Given all the conversations about Black Panther, these episodes underline the idea of black excellence but not in a comic book, science-fiction or fantastical way. It also underlines that you don't need murder and mayhem or even action and adventure to deliver great drama. The episodes are about a Supreme Court case, what's involved to get one heard and what it takes to argue one, which might sound boring on paper but delivered so well in these two hours of TV.

Kerry Washington (The Last King of Scotland and Django Unchained) stars as Olivia Pope, the main character of Scandal. The series is in its seventh and final season. A lot has happened in those seven seasons. The most relevant is that Olivia was the Chief of Staff to the first female, American president. In the reality and timeline of this show, the 44th President was not Barack Obama but a white man named Fitzgerald Grant aka Fitz, played by Tony Goldwyn. In a crazy turn of events in the sixth season, Fitz's wife, Mellie Grant, played by Bellamy Young, became president. Olivia helped with her campaign but once in office, Olivia got drunk with power and did some illegal things to hold onto power. Eventually, she was fired from the White House or forced to resign and then took a teaching gig. 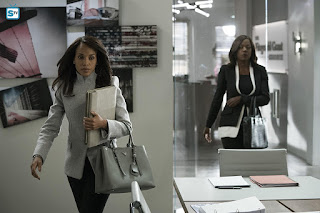 Viola Davis (Fences and The Help), who won an Oscar last year, stars as Annalise Keating, the main character of How To Get Away With Murder. Annalise is a former professor and an attorney in Philadelphia. She normally represents people who are charged and put on trial for murder. Things were upended in the third season when Annalise was arrested and charged with murder herself. She managed to get out of it but not without losing everything she had. She's now starting over as a public defender but this fourth season focuses on her building a class action lawsuit against the state of Pennsylvania for abuses in the criminal justice system.

Annalise has trouble getting her lawsuit in front of the Supreme Court, so her former student and law assistant, Michaela Pratt, played by Aja Naomi King, recommends she ask Olivia for help because of her connection to the White House. Annalise hops on a bus and heads to Washington, DC, and sits-in on Olivia's class. At first, Olivia  thinks Annalise is too much of a mess to get the case in front of the Supreme Court, given the vetting of the White House and all the media attention that would be needed. Aside from the murder charge, Annalise is also a documented alcoholic, which almost cost her her law license.

Olivia criticizes Annalise for being a mess, but Annalise sizes up Olivia and realizes that Olivia might look well put-together but Olivia is equally as a mess. There are two crossover episodes. The first is Scandal and its episode is called "Allow Me to Reintroduce Myself," which concerns Olivia and Annalise trying to reintroduce themselves and take steps away from being messes and instead being better people. In that effort, they first have an epic showdown while getting their hair done in a beauty salon, which brilliantly brings up issues concerning African-American women from classism to colorism. It was one of the best verbal sparring matches ever seen. 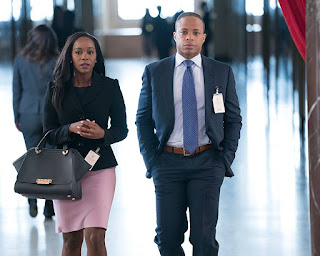 Olivia gets help reintroducing herself or simply reminding herself of who she is by Fitz. Fitz runs the Fitzgerald Grant Institute. His second-in-command at the institute is Marcus Walker, played by Cornelius Smith Jr. Marcus was the former White House Press Secretary. Marcus is worth mentioning because he and Michaela have an affair, which is a plot that carries into the other crossover episode, which is How To Get Away With Murder, titled "Lahey v. Commonwealth of Pennsylvania."

Annalise gets help reintroducing herself from her parents. Her dream as a lawyer was to argue in front of the Supreme Court. Such a monumental event compelled Annalise to have her parents there, especially her mom, Ophelia Harkness, played by Cicely Tyson. With Ophelia, this crossover puts four, powerful, black women in frame and shows representation across the generations. Tyson is in her 90's. She's a nonagenarian. The experience and reflections of an elderly black woman are a kind of cherry on top of the already female, black excellence here. 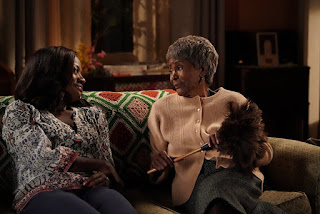 Meanwhile, Annalise has a few personal demons to fight. One of which is her alcoholism. In typical, Shondaland fashion, she doesn't handle it quietly or even easily. It's loud and definitely the hard way. Yet, it all culminates in an incredible speech that would rival Atticus Finch's closing argument in To Kill a Mockingbird (1962) or Frank Galvin's in The Verdict (1982). At the end of the day, a great legal drama should culminate the way, but what the Shondaland writers also accomplish is making this a great relationship drama between these two black women, which makes this whole thing just great all around.