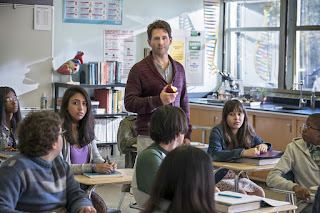 Four years ago, CBS tried the series Bad Teacher. Its title basically told you all that you needed to know about the show. CBS cancelled that series. Now, NBC is trying it again with this series. The difference is that this series is trotting out an insufferable man at its center and not a gold-digging woman. At least, for the woman, she was trying to improve her life, yes in selfish ways, but, not like here, where the man isn't really trying to improve his life, as he is trying to destroy another person's life. Specifically, he has a rival whom doesn't know he's a rival. The problem is the so-called rival isn't really a character in this series and his rival's minor presence doesn't warrant whatever wrath he incurs from the male teacher here, which might be the point, but it makes it difficult to root for that male teacher who is this show's protagonist. It makes it even more difficult to like that protagonist, which some might appreciate. I find it intolerable.

Glenn Howerton (It's Always Sunny in Philadelphia) stars as Jack Griffin, a disgraced, Harvard philosophy professor who has to live in his late mother's house in Toledo, Ohio, and take a job teaching biology in Whitlock High School. He doesn't care about his job or the students, but because the principal lets Jack not do his job and the students are mostly compliant, Jack's focus is concocting ways to destroy Miles Leonard, played by Tom Bennett, who I think is in Los Angeles, so the rivalry is meant to be ridiculous and ultimately ineffectual, so I don't understand why creator Michael Patrick O'Brien (Saturday Night Live) even bothers with it, even beyond the pilot episode.

I suppose that the show can focus on the students or the other teachers, but unlike a series such as Glee, the other characters here aren't really made all that interesting or distinct. Granted, the series has only had five episodes, but by the fifth episode, Glee had already well-established all of its characters and was involving them in strong storylines that made us strongly care and invest in them. Aside from some minor bullying stuff, there hasn't been a strong hook here for the student-characters. 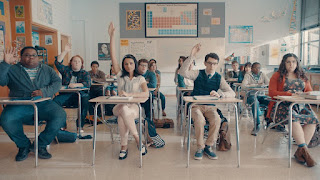 It might be unfair to compare this series to Glee, so instead another comparison might be to NBC's Community. The premise isn't exactly the same, but there are similarities to be drawn. Instead of a disgraced professor who has to teach at a lower-level school, Community had a disgraced lawyer who had to attend and ultimately help study with a bunch of adult-students at a lower-level school. Yet, the disposition of Howerton's character here isn't far flung from that of Joel McHale's character in Community. It's clear though that Dan Harmon, the creator of Community, is a far better writer than O'Brien is here.