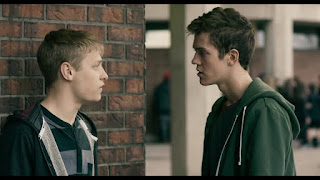 Yan England is a French-Canadian filmmaker who was nominated for an Oscar at the 85th Academy Awards for his short film, Henry (2012). His latest film is set in Quebec and focuses on school bullying, particularly the bullying of gay teenage-athletes.

Despite Canadian Prime Minister Justin Trudeau being totally gay friendly and an outspoken advocate for LGBT rights, there's still homophobia with which to contend on the school and street level. Despite Canada hosting the Pride House, a space for LGBT athletes at the Winter Olympics this year and in previous years, athletes up north still have to face bigotry. Despite the Azmi Jubran court case and the numerous gay-straight alliances in Canadian schools, the suicide rate among gay youth is still disproportionately higher than among their straight counterparts. All that being said, the degree of homophobia in this movie feels as though this film were taking place 10 or 20 years ago and not today.

Breaking Glass Pictures is releasing this film in the United States. It recently released Hidden Kisses from France, which was a film about gay teens getting bullied in that related country. Blue is the Warmest Color also from France briefly deals with lesbian teens who get bullied. There have also been other recent films about teenage athletes in other countries who are gay and who get bullied. Those films include Boys (Jongens) from the Netherlands and Handsome Devil from Ireland, which is also a Breaking Glass Pictures release, so Yan England's movie is part of a trend in queer cinema that has been building over the past half-decade or so. 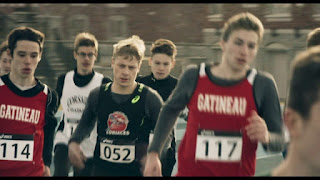 Antoine-Olivier Pilon (Mommy) stars as Tim Fortin, a 16-year-old student. He's a former track-and-field star who was really good and who won a provincial championship in the 800 meter. He could have competed for the national title, which probably could have earned him a spot in the Olympics, but he stopped running and now it seems his favorite subject in school is 11th grade chemistry. His teacher for which, Mr. Sullivan, was also his track-and-field coach. Sullivan probably got him into chemistry, but what seems to be a draw is the chemistry Tim has for his chemistry classmate, Francis, played by Robert Naylor (Arthur and Being Human). Tim hangs out at night with Francis and on one occasion almost kisses him.

However, Tim hides the fact that he has feelings for Francis from everyone else, even at school. People at school though know Francis is gay and athletes or jocks mercilessly bully him. What is problematic is that Tim doesn't really say anything or defend Francis in effective ways. If you've seen Hidden Kisses, that film had a similar scenario but that movie was told from the point-of-view of the bullied child and the closeted jock was on the periphery. Here, the reverse is true. This movie is told from the point-of-view of the closeted jock and the bullied child is the one on the periphery.

While Hidden Kisses is about how a bullied child can often stand up to the bullying and peer pressure, this movie is about how a bullied child can also often succumb and buckle under that pressure, sometimes seeing suicide as the only way out. In that regard, it's not that different from another foreign film dealing with gay teens and bullying, the recent Heartstone (Hjartastein) from Iceland. That movie was less about the sports culture, whereas this one is. In that, this movie is more in-line with Handsome Devil. It's really just another example of how Breaking Glass Pictures is finding contemporary, gay teen stories from all around the world that are addressing the inherent homophobia among those teens. So many that are of a piece cannot be denied. 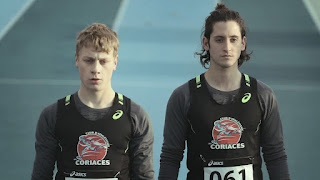 There are of course tons of stories on web sites like Outsports that are reporting on how college or even high school athletes are coming out as LGBT and being warmly embraced, but, for every positive story, there are probably tons of negative ones. With religion and faith being strong in this country, there are obviously still ways to go until majority acceptance and even majority embrace of homosexuality. I can't speak for how it is in Canada, but I imagine there are some parallels, as this movie suggests.

As such, there's difficulties on the sports field and in the locker rooms that this movie depicts. At times, I was reminded of Race (2016), a film that was shot in Canada by director Stephen Hopkins but was about Jesse Owens, the track-and-field star who faced bigotry and discrimination in the 1930's for being African-American. Here, Tim decides to go back into track-and-field and he's scared of facing similar bigotry and discrimination for being gay.

Tim has the ability to hide his same-sex attractions. Jesse Owens couldn't hide his skin color, but that's when this movie goes into the realm of cyberbullying where echoes of the Tyler Clementi case begin to reverberate. Thanks to digital technology and social media, a person's private life can be discovered and spread like wildfire and the effects can be devastating or even explosive. This movie is explosive, perhaps in ways that lean toward Carrie (1976). Pilon's performance is pretty superb. He's around the same age as recent, young, Oscar-nominee, Timothée Chalamet. He's actually a couple of years younger, but I would argue he's just as strong, if not a stronger actor. Yet, I don't know if I would put either of them in the same category as Sissy Spacek. 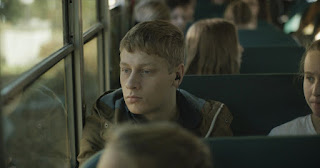 One misstep though is the implication that an ex-girlfriend of Tim who seems to insist he's gay when he never identifies as one thing or the other. The movie seems to insist that that's what Tim is, but England's script could have made room for the possibility that Tim is bisexual. It's too often that bisexuality or sexual fluidity is completely overlooked, but that's just a minor quibble.