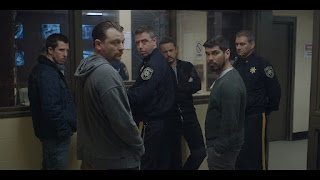 The Black Lives Matter movement or BLM is only five years old, so it hasn't been a long enough time to have enough content that directly addresses the movement with which to compare, but this series is still miles above anything out there that's tackled or even touched upon the movement.

Last year, there was a limited series called Shots Fired on FOX that was in several ways a precursor to this. It was created by Gina Prince-Bythewood and Reggie Rock Bythewood. It focused on a Justice Department investigation of a cop shooting an unarmed man. BLM is all about white police officers shooting or otherwise killing unarmed black men. However, Bythewood reversed it, so that it was a black police officer shooting an unarmed white guy. That reversal might have been interesting from a creative standpoint, but it missed the mark of what the point of BLM is. Bythewood's series also leaned more into the soap opera aspects and away from the verisimilitude that this series thoroughly embraces. It's interesting to compare the two because two actors from Bythewood's series also appear in this one. 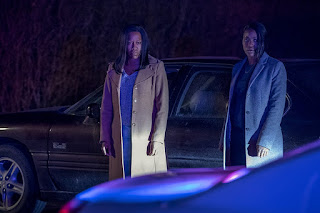 Regina King (American Crime and Southland) stars as Latrice Butler, the mother of Brenton. She's a housewife and a very faithful, church-going woman. Through her, we experience what's commonly known as the five stages of grief or the Kübler-Ross model. It's not exactly the five stages in the exact order of Kübler-Ross, but seemingly it's all there, and King gives a pitch-perfect performance of a person riding the waves of emotions in the wake of such a tragedy or loss.

Russell Hornsby (Fences and Lincoln Heights) also stars as Isaiah Butler, the father of Brenton. He's a black man, struggling to live a blue-collar life, pay the bills and raise his family, while avoiding the trappings of gang and ghetto life. It's the same struggle that we've seen in things like John Singleton's Boyz n the Hood (1991). However, this series approaches it from a slightly different angle. Isaiah isn't a single father, and Brenton isn't being raised in a single-parent household. Ostensibly, Isaiah is doing everything right. What leads to the problems here and in the aftermath of Brenton's hospitalization is more complicated and nuanced. Isaiah says he has to be harsh in order to keep his son from falling into a gang. His best efforts though won't stop outsiders from their prejudices and bigotry of seeing a black teen in a hoodie and thinking him a thug.

Zackary Momoh, a new and up-and-coming black British actor, co-stars as Seth Butler, the brother of Isaiah and uncle of Brenton. One of the reasons Isaiah pushes so hard to keep Brenton out of a gang is because Seth fell into the thug and gang life. When he was Brenton's age or younger, Seth was on the streets selling drugs and whatnot. Seth has since turned his life around and went into the U.S. Air Force where he served his country overseas, but, as was seen in the recent Thank You For Your Service (2017), a black soldier or a soldier of color coming home can have a myriad of issues in readjusting into civilian life and not being pulled back into street life. Knowing that street life can get justice or a certain kind of justice that the courts can't is also a draw for Seth when he sees the courts failing Brenton. 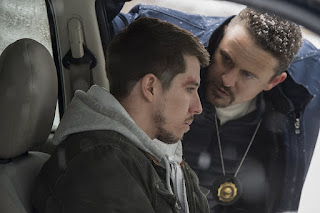 David Lyons (ER and Revolution) also co-stars as Mike DiAngelo, the leader of the narcotics unit. He's married with no children, mainly due to biological problems within himself. Because of which, he treats the other guys in his unit in a fatherly way, except in an overly protective and psychotic way as well. This is certainly the case with Peter. Mike becomes psychotically protective of Peter. It's a warped kind of love.

Raúl Castillo (Looking and Atypical) plays Felix Osorio, the Puerto Rican member of the narcotics unit. Patrick Murney (Public Morals) plays Manny Wilcox, a version of Mike who's just as chauvinistic and racist, if not more so, as he's constantly calling Felix a Mexican. With these two and Peter, Mike leads a team of corrupt cops akin to the guys in The Shield or Shades of Blue. In a weird way, these guys really sink to some dark places, possibly even darker than The Shield because the victim and even additional victim are children, underage minors. Castillo's character in particular is the one who waivers back-and-forth between the darkness and the possible light, other than Knapp's character of Peter.

However, it's Regina King, Russell Hornsby, Zackary Momoh and Clare-Hope Ashitey who are the actors in this series who are given the most and all four give incredible performances that knock it out the park. Anytime, any one of them was on screen, I was glued and utterly transfixed. I couldn't take my eyes off them. As I watched all four, I was so moved by each. One, if not all of their names should be read come Emmy time. 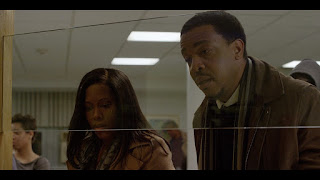 Created by Veena Sud (The Killing and Cold Case), this series is basically a Law & Order episode, stretched into ten hours. It's not as snappy or zippy. There is a slower and more realistic pace and muted tone to this series, but this is done to allow us to get to know what are about a dozen characters. That's a lot to juggle and ten episodes are needed for that. Sud takes her time to build each person and have us understand them, all while building to a conclusion that can be seen as both bleak but satisfying.

Yes, there are so many characters. I've named a lot of them, but special shout-out has to go to Michael Mosley (Ozark and Sirens) who plays Joe Rinaldi aka "Fish." His character was so annoying at first but where he ends up in terms of what you think of him is very good. Michelle Veintimilla (The Gifted and Gotham) who plays Marie, the wife of Peter, and kind of Lady Macbeth was incredible. Jeremy Davidson (Army Wives and Pan Am) who plays James Connelly is good, briefly as the sexy but typical politician, but I was blown away by Corey Champagne, a young black actor from Atlanta who plays Kadeuce Porter, a young gang member who turns out to have a few surprises to him, not only about himself but also a secret about Brenton. 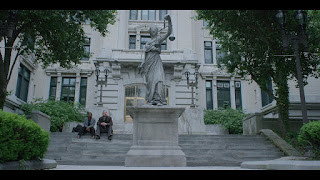 It did take some time to hook me, but by Episode 4, I was on the edge of my seat for this, again mainly for the performances, and Sud's writing with her team, which is exemplary. For tackling BLM in such a powerful way, this is the first new TV series of 2018 that I find will be hard to top by year's end.