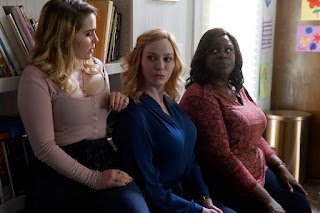 It's not surprising that the creator, Jenna Bans was a writer on ABC's Desperate Housewives. The three women in this show are desperate housewives of a type. The tone of this series is less soap opera-spoof and more in the vein of Breaking Bad if that show was run by and had the sense of humor of Mike White. In fact, Mike White wrote a film called The Good Girl (2002) starring Jennifer Aniston and it feels as if Aniston's character and aspects of her situation were transplanted into this show.

Christina Hendricks (Mad Men) stars as Beth Boland, the wife of a used-car salesman who is cheating on her. They live in Detroit. They have a few children. Unfortunately, her husband Dean, played by Matthew Lillard, made a lot of bad investments that have put them in dire, financial straits.

Mae Whitman (Parenthood) co-stars as Annie Marks, the sister to Beth. Annie is the ex-wife of a wealthy man named Gregg, played by Zach Gilford. Annie is in a custody battle with him over their gender non-conforming daughter, Sadie Marks who has unfortunately become a latch-key child. Annie isn't strictly a housewife like her sister. She works as a grocery store clerk but her boss is very shady.

Retta (Parks and Recreation) also stars as Ruby Hill, a waitress at a diner who works for tips. Her husband Stan, played by Reno Wilson, is training to be a cop, but right now they have a daughter who needs a kidney transplant, which they can't afford.

The money troubles of all three women are the driving force for their initial criminal act, which is akin to the women in Set It Off (1996). Yet, that is only a jumping off point. At first, this series might be the television equivalent of what Warner Bros. is doing with Ocean's 8, though it's not that kind of crime comedy. Comparatively speaking, it's more trying to be a Coen Bros.-style comedy. The women start down a bad road and things only get worse. In that, the series does come up with some clever spiral or quicksand-like narrative moves. 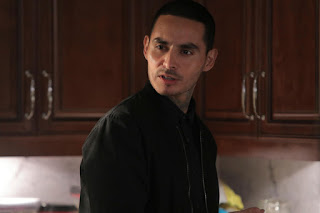 Yet, Beth's trajectory isn't like she's in quicksand by the end of Episode 3. I thought her arc might go the way of the mother in The Deep End (2001). Tilda Swinton played the mother in that movie and Goran Visnjic played the criminal blackmailing and threatening her. Here, Rio is supposed to be akin to Visnjic's character. Yet, Beth's interest in Rio is not of fear. It becomes one of intrigue and attraction, which I'm not sure the series has done enough to sell Beth's turn to the dark side. She's also certainly not the female Walter White. Her turn might be too abrupt, but it certainly makes me curious to see where it goes.