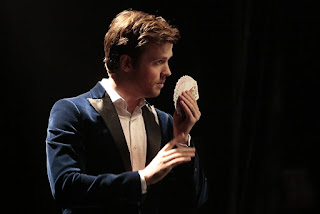 The creator Chris Fedak worked with Hollywood super-producer Greg Berlanti on the CW series Legends of Tomorrow. Berlanti is a super-producer because he is currently the producer in executive of over a half-dozen TV shows. One of those shows is NBC's Blindspot that was created by Martin Gero. Gero is also an executive producer on this show. While this series could be compared to other police procedural programs like The Mentalist (2008) or Castle (2009), this one feels particularly like Blindspot. I don't think it's as good as Blindspot, mainly because it doesn't totally break out of the police procedural mode like Gero's show did almost immediately. Gero established his show as an action series set against global terrorism, coupled with scientific or intellectual puzzles. It separated itself in that way. This series tries to separate itself, but it ends up being not as distinctive, only derivative really.

Jack Cutmore-Scott (Cooper Barrett's Guide to Surviving Life) stars as Cameron Black, a magician in the broadest sense. He refers to himself as the world's greatest illusionist. He does everything from card tricks to escape acts. He even made an airplane disappear. He had a TV show, which he did live from Las Vegas. Now, he's a consultant for the FBI office in New York City. Blindspot also had an unconventional consultant for the FBI in Manhattan. 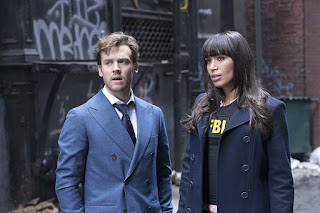 Cameron is searching for a mysterious woman who is masterminding a grand scheme that includes framing Cameron's twin brother, Jonathan Black, for murder. Cameron's goal for this show thus far is finding this mysterious woman and proving his brother's innocence. The first season of Blindspot is all about a mysterious woman named Shepherd who also has a grand scheme, although Gero set up it that the protagonist wasn't trying to prove a sibling's innocence but her own. There's only been a few episodes, but thus far the grand scheme here doesn't feel that grand at all and the murder case involving Cameron's twin is really glossed over.

Gero had fun in building a puzzle and connecting the dots. That, in addition to the martial arts and gun-play made the series extremely fun. Fedak has his fun too. A lot of that fun is deconstructing Cameron's magic tricks and him and his team figuring out ways to use them to help the FBI solve crimes unrelated to his twin's incarceration. The fact that a magician has a twin or a clone is an idea from The Prestige (2006), which is a far better deconstruction of what illusionists do.

This series is less about the business of magic. It really runs with the premise of cops pulling tricks or illusions in order to catch criminals. Essentially, cops already pull tricks to catch criminals. They're called going undercover and sting operations. The fact that Cameron and his team can perform sleight of hand gives them some kind of advantage, but we'll have to see how far Fedak can stretch that so-called advantage. 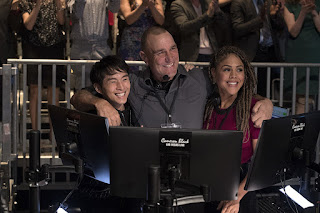 He does have a diverse cast, which is the case for Gero's show and all of Berlanti's shows. Amaury Nolasco (Prison Break and Telenovela) is Puerto Rican and he plays Mike Alvarez, the FBI agent who is a fan of Cameron's magic acts. Lenora Crichlow (Being Human and A to Z) is Afro-British and she plays Dina Clark, the sassy but cool, magician's assistant, and Justin Chon (Gook and Twilight) is Korean-American and he plays Jordan Kwon, the pickpocket and magician's assistant too.

Ilfenesh Hadera (Billions and She's Gotta Have It) is African American and she's the co-lead of this series. She plays Kay Daniels, a NYPD-turned-FBI agent. She reveals that her sister died of a drug overdose, so she understands what it's like to lose a sibling. She promises to help Cameron get his twin back or at least out of jail. Most likely, the end of this season will be her doing just that, but we'll see how Fedak keeps it going. Gero found ways to keep his series going despite having what seemed like a limited premise.