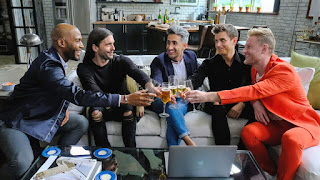 The reboot of Bravo's Queer Eye for the Straight Guy is very fun, very charming and very heartwarming. At its fundamental level, it's a makeover reality show. There are an abundance of those that have come and gone over the past 20 or 30 years. There's a dozen or so lifestyle, cable channels dedicated to these kinds of shows like Bravo, E!, the Food Network, HGTV and TLC. Each reality show though will typically focus on one particular aspect of a person's life. For example, What Not to Wear (2003) focused on fashion. 30 Minute Meals (2001) focused on food preparation. Trading Spaces (2000) focused on home improvement. What this show did in its original incarnation was combine all those various aspects into one program, so instead of learning one of those things, the person who was the subject would learn how to do five things or at least have five of those things done for him.

Queer Eye for the Straight Guy was unique because it was an umbrella show. You got a little of everything all in one program. What also was unique was that the show came in the wake of Will & Grace (1998) in a time where there wasn't as much LGBT representation on television, but this show decided to put five, openly gay men in the homes of straight men and push the envelope in trying to bridge that divide. It also did a lot to advance the idea of a metrosexual, even for non-metro men.

In the 15 years since, the landscape has changed. There are openly gay characters in many TV shows, even in many reality shows. Gay marriage is legal in all of the United States, thanks to the Supreme Court. Yes, there are still issues of homophobia and transphobia in the country, but the representation as it stands wouldn't warrant this reboot.

The personalities of the hosts would have to be such as to be so outstanding. The original cast was that for sure. This new cast is equally, if not more so. I didn't really watch the original, but this series is really good about building interpersonal relationships and exposing the people involved. It does so by revealing histories not only of the subjects but also of the hosts. Basically, I feel like this show lets us more into the lives of everyone here than what was done before.

Bobby Berk is the design expert. He does the home decorating or remodeling. He's from the Bible Belt but lives in Los Angeles. He worked for several furniture companies before launching his own interior design operation.

Antoni Porowski is the food expert. He gives cooking tips or even will demonstrate certain recipes. He's from Montreal, Canada, but lives in New York City. He started as an actor before becoming a restaurant manager and personal chef.

Jonathan Van Ness is the grooming expert. He helps guys with their hair and hygiene. He's from the Midwest. He trained at the Aveda Institute in Minneapolis. Aveda does skin and body care and is now owned by Estée Lauder. Many people probably know him from his podcast or his web series Gay of Thrones, which are recaps of the HBO series from his beauty salon.

Tan France is the fashion expert. He picks out the wardrobe for guys. He's from the United Kingdom. He lives in Salt Lake City, Utah. He's married. He's an openly gay Muslim with a Pakistani heritage. His grandparents were clothes makers, which inspired him to study it and go work for high-end retailers in Spain and England. He now has his own women's' clothing line. 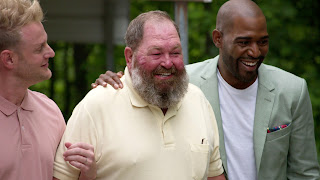 Karamo Brown is the culture expert. He gives guys advice on how to conduct themselves in order to promote their business or boost their confidence. He's from Houston, Texas. His parents are Jamaican. He graduated from Florida A&M University. He was cast in 2004 at the age of 23 to be in MTV's The Real World: Philadelphia. Afterward, he worked as a social worker and as a TV and online personality, doing activism combating HIV and providing support for LGBT youth in Los Angeles.

The eight episodes are all set in Georgia, in or near Atlanta. They roll up to each subject in a big, black, GMC truck. The first subject is Tom Jackson, a 57-year-old grandpa, a guy who could be confused for a disheveled, department-store Santa Claus who lives in a basement apartment and loves vintage cars. Van Ness helps him with his lupus and shaving his beard. Berk gets him a new bed and chairs for his bad back, as well as a new patio. Porowski helps him to cook guacamole. France gets him a new hat and shirts, and Brown pushes him to ask out his ex-wife whom he still loves.

Each guy meets with the subject and gives something of their own specialty. Sometimes though, the brief, one-on-one times with each expert actually reveal interesting or compelling, intimate details or empathetic stories, allowing us to deeply understand the guys on either side. For example, Episode 2 is about Neal Reddy who is of Indian heritage. Because Tan France is from Pakistani heritage, the two are able to relate. India and Pakistan are two neighboring countries and there is crossover for people from both countries. In Episode 3, Karamo Brown has a conversation with the subject, a Georgia cop named Cory Waldrop about Black Lives Matter. It allows two people on both sides of a very controversial issue to talk openly with each other and actually listen to each other. In Episode 5, Bobby Berk has a conversation with the subject, a church activist named Bobby Camp about homophobia in the church because both are from the Bible Belt.

So, this show really tackles social issues directly, but it's also more emotional than one might expect. The Fab Five, as they're called, play amateur psychologists or therapists, or in Jonathan's case just inspirational cheerleaders to make people feel good and walk with their heads raised. In Episode 4, AJ Brown, a closeted young black man who is the subject talks about not simply an external transformation but an internal one. That's what's key here. The show tries not to be simply superficial but cut a little deeper. 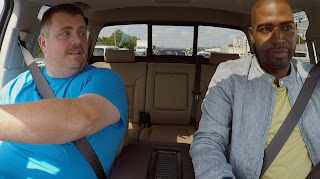