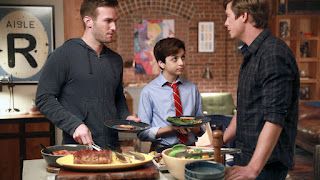 Mindy Kaling created this series with Charlie Grandy (Saturday Night Live and The Daily Show), but Kaling is the main creative force here. If you're seen her FOX-turned-Hulu series The Mindy Project, you'll notice that she has a template, which is being utilized here. That template for a half-hour comedy was effective when she was playing the protagonist because it provided a character and circumstances we normally don't see on television. The way Kaling has it set up here, we mostly get clichés and stereotypes that have been portrayed and perpetrated on screen before and probably dozens of times by now.

Anders Holm (Workaholics) stars as Vince Cook, the owner of Brooklyn Champions, a fitness gym and athletic club in New York. He runs the gym with his brother, Matthew, played by Andy Favreau (The Mick). The idea of two brothers, two white and heterosexual brothers as the center of a TV series, is certainly not new.

ABC Family's Baby Daddy (2012) and FOX's Enlisted (2014) also centered around two brothers who either lived together and/or worked together as the two brothers here do. The dynamic for each of the brothers in both those shows is pretty much the same. In Baby Daddy, one brother all of a sudden has fatherhood thrust upon him, a responsibility for which he thinks he's not ready and tries to avoid, meanwhile he has an incredibly sexy but also incredibly stupid brother who is there for almost unwavering support. It's almost the exact same dynamic here for Vince and Matthew.

Vince decides to sell his gym without telling anyone when his 15-year-old son, Michael shows up on his doorstep. Michael's mom, Priya Patel, played by Kaling in a recurring role, brings Michael to New York to stay with his father whom he's never known. Priya lied to Michael about his father being someone else and Vince denied that his son even existed to Matthew and everyone in the gym. Now, this single guy has his version of About a Boy where he has to deal with fatherhood after being a swinging, single guy for so long. All the while, Matthew just says dumb things. 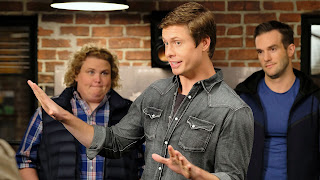 So the brothers are stereotypical. Even if they weren't brothers, their dynamic is similar to two characters from The Mindy Project who begrudgingly became de facto brothers. Danny Castellano, played by Chris Messina, seemed like the template for Vince, and Morgan Tookers, played by Ike Barinholtz, could have been the template for Matthew. Only, Messina and Barinholtz are funnier and more engaging in their roles than Holm and Favreau are here. The writing isn't as interesting either. The writing for Baby Daddy and Enlisted was arguably better than the writing here too.

Yet, that's not a total condemnation of Kaling's show. Even though the pilot episode for The Mindy Project was probably one of the best pilot episodes that I've ever seen for a series, the writing for Season 1 and Season 2 of that show were not the greatest. The end of Season 2, certainly Season 3 and onward were fantastic as the show figured out a dynamic that worked better and dug into it. I wouldn't be surprised if this show takes some time before it figures out a dynamic that works. Hopefully, it doesn't take three seasons.

As it stands now, the whole thing between the brothers isn't working. There's potential. Michael, played by JJ Totah (Glee), is Vince's son and in the first couple of episodes, it seems like Michael likes his uncle more than his father. His uncle is more accepting and more embracing of Michael than his father. If Kaling and Grandy could dig into this more and develop that more, then this series could be something special. It would also be nice if Kaling allowed Michael to be gay in ways that wasn't just making pop culture references but in ways that result in him actually kissing boys. 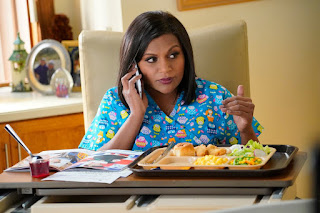 Michael is very much the same as Kaling's character herself in The Mindy Project but in the body of a prepubescent boy. While that might be lazy, it could also be an interesting proxy or surrogate, if Kaling allows Michael to act on his same-sex attractions and have actual relationships.

Fortune Feimster (Chelsea Lately) plays Ruby, another queer character, a possible lesbian or bisexual person. I would implore Kaling also to let Ruby have actual relationships, which we see on screen. Don't let it just be lip service. Otherwise, why are these characters here, if Kaling isn't going to allow them to be who they are in every respect?