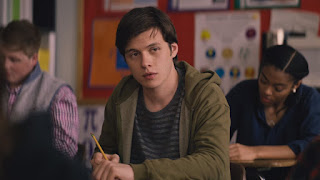 Nick Robinson (Jurassic World) stars in a bland, gay-teen, romantic comedy that is short on romance and even shorter on comedy. The whole thing is more about his friendships with three straight people than it is about him actually being gay. This isn't the first YA novel with a central gay character to be adapted into a film. It's simply the first to get a sizable, Hollywood budget, thanks to 20th Century Fox. The Perks of Being a Wallflower (2012) and Geography Club (2013) are two other examples. Geography Club at least allows the gay teen to be in a relationship, if even down low. Here, Robinson's Simon Spier literally spends 99-percent of the movie as a single guy. He sends emails to an anonymous guy called "Blue" through a very vague web forum when all the while he could have been on Grindr, which he does mention.

Obviously, there are way better films about gay teens than this. Doing Time on Maple Drive (1992) is about a teenage college student coming out as gay. Wild Reeds (1994) is a film by French filmmaker André Téchiné about a gay teen during the Algerian War. Beautiful Thing (1996) is about two British teens dealing with physical abuse and poverty. Camp (2003) is about gay teens at a summer camp. The Deep End (2001) is about a gay teen and his relationship with his mother. Dorian Blues (2004) is a comedy about a gay teen in upstate New York. Sugar (2004) is about a Canadian gay teen who meets a gay hustler. Blue is the Warmest Color (2013) is about a teen lesbian in France. There's also the recent Oscar-winners Moonlight (2016) and Call Me By Your Name (2017). Even if you didn't like those films, they are cinematically light-years above this one. It's simply that this film is more marketable to the mainstream because it is so bland. There's no actual gay sex or nudity. It's basically sterile.

Yet, as I was watching because of the title I kept writing down things about it using the titular word. When it comes to Simon, he and the plot of this movie can be described thusly: 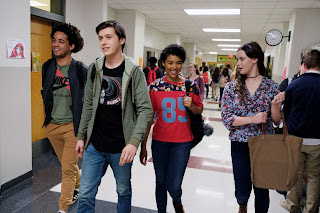 Love iced coffee. Love car pooling. Doesn't love homophobic jokes in school or by his dad. Love to email "Blue." Doesn't love the vice principal or VP stealing his phone. The VP, by the way is played by Tony Hale (Veep). Get it? VP! Doesn't love theater practice.

Love Oreos. Love Panic at the Disco. Love Daniel Radcliffe. Love "when did you know" stories. Love wondering who "Blue" is. Love Bram, played by Keiynan Lonsdale (The Flash and The Finest Hours). Love Waffle House guy, Lyle, played by Joey Pollari (American Crime and The InBetweeners). Don't love being blackmailed by Martin, played by Logan Miller (Before I Fall and Scouts Guide to the Zombie Apocalypse). 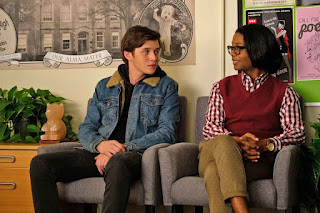 If any of that tickles your fancy, then this film might be right for you. Personally, I think G.B.F. (2014) or Being 17 (2016) are better films about this very subject, but hopefully whatever success this film has will inspire the adaptation of more gay YA novels like John Green's Will Grayson, Will Grayson, Bill Konigsberg's Out of the Pocket, David Levithan's Boy Meets Boy, Hero by Perry Moore or Alex Sánchez's Rainbow Boys.