VOD Review - My Entire High School Sinking Into the Sea 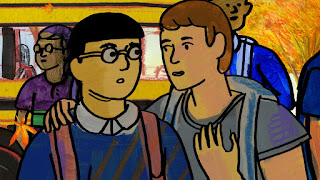 This movie is very much a showcase of Dash Shaw, the comic book artist. He's published several graphic novels under Fantagraphics. He's done some work for some films, but this is his feature debut as writer-director. Shaw has a very distinct comic book and animation style, which I can't explain but it includes quill ink, colored pencils and markers. He also incorporates collage and watercolors. That technique is certainly put on display here. It's incredible because there are several sequences under water. There are several psychedelic scenes that look like exploding Rorschach tests of swirling watercolors, washing and bleeding on screen.

Other than that, the film follows a bunch of characters who at times reminds me of Charles Schulz's Peanuts. Seriously, the main character in this film, also named Dash Shaw, is like a teenage or more grown-up Charlie Brown. Certain facial expressions from Dash look like they were ripped right out of a Schulz newspaper strip. At times though, the animation, the movement of the characters, the edges and borders shaking and being squiggly, feel like Comedy Central's Dr. Katz, Professional Therapist or MTV's Beavis and Butthead. The humor is also somewhere between those two cartoons as well. At other times, the humor and the overall vibe is almost akin to a Wes Anderson film, but maybe that's because of the actor whose voice is the main voice here.

Jason Schwartzman (Fantastic Mr. Fox and The Grand Budapest Hotel) stars as Dash Shaw, a sophomore at Tides High School. He's a little bit of a social outcast. He does have a best friend named Assaf, voiced by Reggie Watts (The Late Late Show with James Corden and Key & Peele). Dash's only real and true friend is Assaf. They go everywhere and do everything together. They even work together at the school newspaper. They come at odds over Verti, voiced by Maya Rudolph (Saturday Night Live), who has a crush on Assaf. Dash gets jealous when he feels that Assaf is being taken away from him, so he lashes out spreading rumors and lies. When he discovers a secret that threatens the school, no one believes him.

What follows is a pretty zany, disaster flick that's animated. It's not like a Disney or Pixar film, or even any other major animation studio. First off, it's rated PG-13 where most Disney, Pixar or even DreamWorks films are rated PG. Being PG-13 isn't that big of a jump usually, but there is a lot of bold things that this movie does. We see here the deaths of teenage children, gory and bloody deaths in fact. Given the recent school shootings, it's a little rough to watch. No one here dies from gun violence and the deaths are all ridiculous, but Shaw does splatter blood across the screen and the movie does swim literally in the dead bodies of children. In that regard, it's comical in the ways that South Park is, which is fine because this clearly is a cartoon for adults, which is lacking usually in mainstream theaters.

Like with most disaster flicks in the vein of Roland Emmerich or somebody, after the earthquake happens, which causes the titular event, the movie moves from one part of the school to the next as the half-dozen students try to survive. Those students include Dash, Assaf, Verti, Mary, voiced by Lena Dunham (Girls), the lunch lady Lorraine, voiced by Susan Sarandon (Thelma & Louise and The Client), and the senior bro Brent Daniels, voiced by John Cameron Mitchell (Hedwig and the Angry Inch). There are a few other students who tag along, but it's basically watching as they try to escape this death trap.

It's basically The Poseidon Adventure (1972) meets The Towering Inferno (1974), but with all the comedic nature of something like Sharknado (2013). It simply takes some of those movies and makes an animated version of them, which I'm sure many people can appreciate.

Available on Netflix and other VOD platforms.