DVD Review - Into the Lion's Den 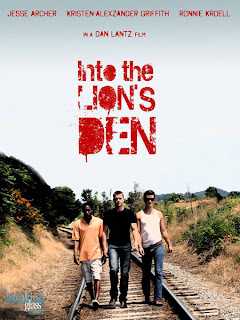 With the title of this movie, I doubt that screenwriter Philip Malaczewski is referring to Dave Salmoni, the animal trainer and TV personality who was attacked by a lion several years ago. Malaczewski's title might be more of a nod to the Bible, which the Book of Daniel recounts in its sixth chapter a story of a man thrown into a pit of wild felines but who came out unscathed due to his faith. Malaczewski could be interpreting that parable but for a gay audience.

The movie directed by Dan Lantz deals with predominantly gay characters. It stars Jesse Archer, the openly gay actor and writer who burst onto the scene in 2004 with the first of a series of gay romantic comedies. This is Archer's first foray out of that and into the more profitable horror genre. Archer plays Johnny, one of three friends on a cross-country trip to Manhattan from Los Angeles.

The car that the three drive belongs to Mikey, played by Ronnie Kroell. Kroell is a male model-turned-actor who made a name for himself in 2008. Kroell's character here of Mikey is a fun-loving boy, but he's clearly haunted by something. Whatever it is, it gives him nightmares and makes him unable to sleep much. Mikey's reasons for going to Manhattan are perhaps to start over and put some distance between himself and the thing that's haunting him.

As his first leading role, I think Kroell has the ability to handle the psychological weight that haunts his character, but I don't think Malaczewski and Lantz give him that many opportunities to make his haunting anything more than a plot device. Kroell is given maybe two scenes where he truly gets to express and show that this thing truly is haunting him and I think he does a good job in those scenes.

One scene happens outside a bar. It's an angry exchange between Kroell and Archer, and, in retrospect, it was a scene that definitely needed to happen, but mostly through Malaczewski's writing, this scene doesn't work as well as it could have because we don't know what's truly haunting Mikey at this point. Malaczewski clearly gets Archer's character, Johnny, to say something that directly points to it but without saying what it actually is. That moment from Archer as well as Kroell's reaction to it would have been dramatically more powerful for the audience, if we were clued-in as to what was Mikey's back story prior.

It's not to say that the moment doesn't have its power and isn't somewhat effective, but it was off-putting because we had no idea what was truly bothering Mikey. But, Kroell's other scene that explores his back story occurs when he returns to his hotel room, and I think that it's this scene that's notable for him as an aspiring actor.

This scene is with his other co-star Kristen-Alexander Griffith who plays Ted. Griffith is a New York City stage actor who may be most widely known for a web series he did called Drama Queenz. Ted is Griffith's first feature film role. Ted is a young guy who's recently come out the closet and is slowly becoming comfortable with his sexuality. Despite being African-American, he comes from a privileged and sheltered background and this is his first steps out his comfort zone and into doing something adventurous. Given his look, his personality, and his energy, Griffith is perfect for playing Ted.

But, if this is Malaczewski playing off the Biblical parable, the so-called "lion's den" might be a substitute for anonymous sex because anonymous sex can truly kill, not unlike the mighty claws of the king of beasts. Into the Lion's Den is perhaps then a cautionary tale for gay men or men in general in this modern world. It does in fact open with a line lamenting man's self-absorption, his childishness and oblivousness to the deadly world around him. The image supplementing this thought is a young man, running half-naked through tall grass. Poking through Lantz's frame is a bow-and-arrow aiming for the boy in a clear hunter-and-prey situation.

Is this a metaphor for how some see sex as deadly or how it can be used as a weapon? If so, this year is certainly the year for it. Kevin Smith's Red State, which premiered at Sundance, kicked things off because that film used sex as a way of luring young people into their deaths, but Smith delighted in depicting violence as splayed through machine-gun fire and limited the sex as just bait, a decoy. Lantz, on the other hand, delights in depicting sex as more than just a lure. Not since the prison rape in American History X or the revenge fantasy in Descent (2007) have I seen sexual sadism brought to the screen with such wickedness.