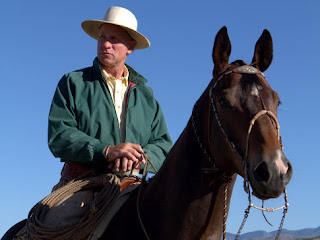 I have to admit my bias upfront. I don't think people in the 21st century should be riding horses. I see horse-drawn carriages in city parks and it bothers me. I'm not a member of PETA or anything, but I see it as horse slavery. It may sound extreme, but I don't think animals should have to do that kind of work in this modern age.

Up until the Industrial Revolution, horses were a mode of transportation and crucial in our agrarian culture, but all that's over now. Humans have cars and other machines so that we don't need horses. The most I gathered from Cindy Meehl's documentary is that horses are used for races, rodeos and circuses, or basically entertainment, and that's simply not entertainment for me.

Buck Brannaman though is a horse trainer. He's a horse expert. He was a contributor and in many ways an inspiration for Robert Redford's film The Horse Whisperer. Meehl does a good job with allowing Brannaman to let us into his world, which consists mostly of traveling about the country holding clinics where he teaches people how to handle horses.

Because he was abused as a child, Brannaman has developed an opposite sensibility to his father who was a very harsh man. Brannaman instead is gentle. He's found historically that most people use torture or at times brutal methods to break horses. He uses smart, non-verbal communication tools and he's very effective.

I think it's difficult not to appreciate what Brannaman is doing or take to heart his message of anti-abuse. Yet, at the end of the day, horses are animals that people in Brannaman's circle believe they have a right to ride. I would just ask Brannaman or his followers how they would feel if they had to carry a person on their back at that person's behest. Regardless if that person is gentle with you, you're still having to carry him or her.

Three Stars out of Five.
Rated PG for thematic material, mild language and an injury.
Running Time: 1 hr. and 29 mins.