Movie Review - My Week With Marilyn 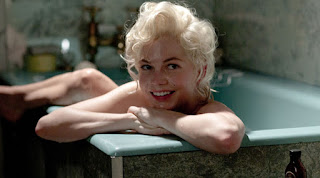 In 1956, Marilyn Monroe went to England to film a movie with Sir Laurence Olivier. A 23-year-old, British boy named Colin Clark persisted until he got a job on that film. He became the Third Assistant Director, which he describes as a gopher or lackey or basically door man to Olivier who was the main Director. This movie is based on Clark's memoir.

The film took me back to this summer's Midnight in Paris. That comedy from Woody Allen centered on a man involved with the movie business who is able to spend time with iconic characters from the past. The circumstances are different obviously and more based in reality, but the basic idea of Midnight in Paris is here. That idea presupposes what a person would do if they could spend time with a celebrity or artist that they idolized.

Unlike with Allen's farce, Simon Curtis' movie focuses on just one celebrity and is able to dig deep into that celebrity and help us know her intimately. On the surface, Marilyn is gorgeous, voluptuous, bubbly, upbeat, funny and a breath of fresh air, but, in a dazzlingly and dizzying performance by Oscar-nominee Michelle Williams, Marilyn is also a nervous and insecure actor, not unlike so many others.

Kenneth Branagh co-stars as Olivier, nicknamed Larry. If Marilyn is nervous and insecure, Larry only exacerbates the situation. The chief conflict pits the two of them against one another. How it manifests itself is through the acting choices and even acting acting process or style each one utilizes.

Larry had a very simple and workman-like approach. He's also very much a product of many years if not decades of the brutal and strict, British and Shakespearean stage. Marilyn, on the other hand, is a student of Lee Strasberg and what became known as "the Method," where the actor has to identify and relate to whatever the character is doing in order to feel like they're embodying that character.

For example, the difference can be illustrated in how an actor delivers a line. For Larry, it's merely saying the line in a believable way. For Marilyn, it's about actually believing in the line that you're saying. For Larry, it's about repeating the words in the script. For Marilyn, it's about making sure the words in the script should be repeated. While on set, Larry and Marilyn clash on these differences. Branagh and Williams play it all very well, but never at each other.

Eddie Redmayne who plays Colin is the one that each of Branagh and Williams' characters communicate their grievances. Colin gets in the middle. He's like a bridge, not just for the two characters but also for the audience to these characters. He's also a bridge between the humor and the heartbreak, the humor we feel in the beginning as we watch these two famous actors air their grievances as well as the heartbreak we feel in the end when we learn what can happen when you get too close to them.

What Colin does also reminded me of a far more independent film than Woody Allen's recent hit. Colin meeting Marilyn Monroe is very similar to Tobe encountering the on-screen woman of his dreams in Meet Monica Velour. There's also similarities to Me and Orson Welles (2009). Of course, it could be considered trite, the notion of a fan becoming disillusioned when he gets to know the famous person he adores. The star somehow shines less brightly. The pedestal on which he puts that person is lowered or brought down in some way. That person and image are not as magical or powerful once he sees who's behind the curtain.

Yet, the filmmakers here don't make this as trite as that. They lead us to believe that Marilyn is all surface and that she's nothing more than a pretty face and a hot bod with a smoking voice. What we learn though from the less bright star, the lowered pedestal and the pulled-back curtain is not just affirmation that Marilyn is a human being who struggles with issues of youth and the future but also that she is the star and talent that many either didn't know or doubted.

With a great, British supporting cast, including Dame Judi Dench, Toby Jones, Dominic Cooper, Julia Ormond, Dougray Scott and Emma Watson, this movie is enchanting with a lead role that will literally put you under a spell. It's sexy and bewitching. I couldn't take my eyes off it or her.

Five Stars out of Five.
Rated R for some language.
Running Time: 1 hr. and 39 mins.