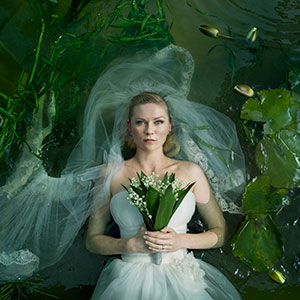 It perhaps is too lofty to say with this piece filmmaker Lars Von Trier has made a type of cinematic opera. IF not, Kirsten Dunst then is the Prima Donna in that regard, except she's no singing soprano. I doubt Dunst will ever be confused with Maria Callas. Yet, there is something overly operatic about this film.

It's divided into three sections. The Overture makes the best case for the audience to expect an aria or two. It's a very triumphant score that establishes or foreshadows the themes. Von Trier pairs that score with these absolutely gorgeous images that also establish and foreshadow. It builds to the entire world being literally blown away. It is possibly the most beautiful apocalypse ever depicted. It's slow motion to the point of stillness, as a way of emphasizing moments as well as emphasizing the luxurious setting, a mansion sitting adjacent a golf course and a lush garden.

In Part One, Dunst is Justine, a blushing bride who has just married Michael, played by Alexander Skarsgård (True Blood). She's smiling upon her arrival to the reception at her brother-in-law's house, but her smiles are just a mask. Justine has to sit through a dinner and a toast. She then has to participate in a dance and cake cutting. Yet, it becomes clear that Justine doesn't want to participate. She keeps pulling herself away, often to be alone. Her brother-in-law, John, played by Kiefer Sutherland, is embarrassed and angry at her absences, particularly because he's paying for everything. Justine has to drag herself through it all.

Her depression is less a sadness as it is a hollowness, a disconnect, a recognition of the meaningless of these traditions or rituals that we as humans build so much on. Justine should be happy. Her boss, played by Stellan Skarsgård, has given her a promotion. Her new husband who is tall, blonde and handsome has given her a plot of land. None of this makes her happy though, almost as if it shouldn't because most, if not all, is just superficial and empty.

There are some who don't view these traditions and rituals as such. Justine perhaps wants to be one of those people, but she can't. She tries to pretend but can't do that either. She either doesn't have the will power or the strength. It might be the latter because it gets to a point where she has to lay down because she's so enervated. It gets to a point where she can't even stand up.

Dunst's performance is excellent as moment to moment you feel her struggling to get through moment to moment. All the while, she's slowly but surely depleted of her vivality. Von Trier's camerawork, which mimics Jonathan Demme's in Rachel Getting Married, is shaky, not to show instability as Demme did but to be like the jitters or wobbly nature of a hand or leg as it's about to give or collapse due to lack of energy.

In Part Two, focus is shifted to Justine's sister named Claire, played by Charlotte Gainsbourg. Claire worries about the Earth's coming destruction. Her reaction is in stark contrast to everyone else. Her sister doesn't care. Her husband doesn't accept it. Claire, on the other hand, loses her breath and totally panics.

It's the perfect and an intensely powerful counter point to the empty rituals of Justine's wedding. In that situation, Justine crumbles but when faced with the end of life as they know it, she flourishes. She's content in many ways or in the least resolved and comfortable. Von Trier captures this with what I feel is this movie's signature shot. It's Dunst laying nude in the grass at night bathed in the light of planet Melancholia and her character Justine reveling in it.

The only problem that I see is Dunst's presence in Part Two, which is reduced in order to favor Gainsbourg. Gainsbourg gives a stellar performance, beyond Oscar-worthy, but Justine barely acknowledges planet Melancholia, which having her speak more about it would have been helpful, but Von Trier gives Dunst a lot of room here and she hardly wastes it.