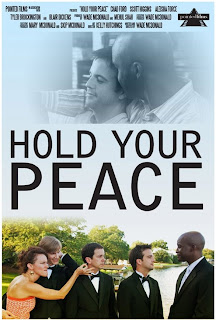 Hold Your Peace premiered at Philadelphia's Qfest, which is one of the largest gay and lesbian film festivals on the east coast. QC Cinema, an arm of Breaking Glass Pictures bought the romantic comedy. It's the first feature of writer-director Wade McDonald.

McDonald's tone though is less zany than My Best Friend's Wedding. It's notably less comedic in general. McDonald handles his material with an evenly dramatic hand, more so than one would expect or want here. McDonald had the elements and potential, but either through lack of time, resources or talent just didn't have what it takes to make this movie snap, crackle or pop like a romantic comedy should.

The problem is McDonald builds his movie on a premise that has been done to death and then proceeds to dump every conceivable cliché or hackneyed joke on top of it. One joke had a person getting kicked under a dinner table for saying something he shouldn't have. When it happened, I couldn't help but roll my eyes. The under the table kick has been done only a billion times! But, back to the premise, Chad Ford plays Aiden , a dour attorney who gets invited to the wedding of his ex-boyfriend for whom he still loves. When asked if he has a new boyfriend, Aiden lies and then has to get someone to pretend to be his boyfriend.

There are so many movies and TV shows that have used this premise. Many of them have skirted by on this pretension and have been rather acceptable because many have been somewhat exemplary in execution. The same can't be all together said here. McDonald moves in a direction that could have made this more acceptable, but he ultimately falls short.

He adds a nice wrinkle in his screenplay, and that's that Aiden and his pretend boyfriend, Lance, go to stay with the future married couple, Max and Forrest, at their vacation home where their wedding will take place. Max is Aiden's ex-boyfriend, and Aiden still loves Max. Obviously, Max's pending nuptials are going to be derailed, but the wrinkle is that instead of being cast offs, Lance and Forrest end up falling for each other.

When McDonald introduced this wrinkle, it gave me hope that the movie could develop into something innovative, something slightly different. It's a love story between the supporting characters, a covert romance between the people who are going to be left at the altar but before they're actually left at the altar. Actually, what happens is that while at the altar, a simple partner swap occurs. It's insidious and kind of brilliant on the part of McDonald.

Yet, the dialogue, the performances and the direction just kill this brilliant idea. The movie ultimately feels clunky and falls flat. One scene between Lance and Forrest in the kitchen shows that. The obvious joke of the scene is that Lance is trying to get invited to Forrest's bachelor party without having to ask. Lance tries to seem pathetic. His efforts are supposed to be subtle but aren't. This is all fine, but, in a movie, a joke like this can be hurt depending on how a filmmaker stages the scene and how he directs his actors, and what McDonald does in this scene feels like it's next to nothing.

McDonald doesn't provide much coverage. Depending on the production schedule or budget, McDonald may have been limited, but I felt like coverage was lacking in general in most, if not all the scenes in this movie. It was frustrating because I thought Blair Dickens in particular who played Forrest was short-changed in that scene. Dickens' back is to the camera for the majority of time. McDonald should have found a way to give us an angle where we could have seen Dickens' facial reactions in that moment.

Things get better after the first hour when Dickens' character is fleshed out as more than just a trophy boyfriend or modern-day, Prince Charming. Yet, a lot of it becomes a drag as the characters have to go through the motions of maintaining the pretense and then eventually having the lies revealed and people getting mad and then having to reconcile. It wouldn't have been much of a drag if it had been funnier or if the progression of it didn't seem so rote and devoid of fire or energy. I suppose if you look at it as more of a drama then it works better but not much better.

Two Stars out of Five.
Not Rated but no harsh language, no sex, a few adult references but no violence.
Running Time: 1 hr. and 37 mins.