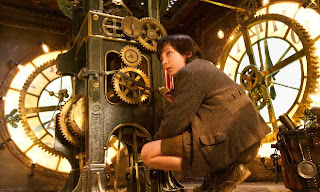 Hugo Cabret is a 12 or 13-year-old boy living in 1920s or 1930s Paris, France. He's a homeless orphan who has taken residence inside the Montparnasse train station. He survives by hiding behind the walls and sneaking through the ventilation shafts and service tunnels. He survives by stealing food and drink.

The reason he's there is because after Hugo lost his parents, his uncle took him. His uncle works at the train station as the man who fixes and maintains the station's many clocks. Some of which are huge, including the main clock tower, which is as big as a house. When Hugo's uncle disappears, Hugo decides to stay and keep up his uncle's job. He bides his time by tinkering with an automaton, a robot that was discarded from a museum.

Hugo has to sneak through the shafts and tunnels because an uptight, police inspector guards the station. Sacha Baron Cohen (Borat and Sweeney Todd) plays the inspector who was injured in the war and has to walk with a brace, but he does have a Doberman Pinscher who can be vicious. Hugo has stolen from various shop owners in the station and the inspector hopes to catch him and ship him to an orphanage where implied horrors await.

One of the shop owners from whom Hugo steals is a man named Papa Georges who runs the toy shop inside the station. Sir Ben Kingsley (Gandhi and House of Sand and Fog) plays Papa Georges who eventually catches Hugo. Instead of turning Hugo over to the inspector, Papa Georges gives Hugo a job. Through him, Hugo meets Isabel, a young girl, also 12 or 13 who's being raised by Georges and his wife.

Hugo shares his love of movies and the cinema with Isabel, played by Chloë Grace Moretz (Kick-Ass and Let Me In). This love of cinema helps the two of them to unlock a mystery that connects the pair in ways they didn't realize. The mystery isn't all that grand and it doesn't lead to a great resolution or revelation. What does come through is the love of cinema that isn't singularly held by Hugo but by others as well.

Based on the Caldecott Medal-winning book by Brian Selznick, the screenplay by John Logan (Gladiator and The Aviator) is nothing special. The story and dialogue are all forgettable, if barely there. Logan tries to make the point of life and the world being like one big machine and every person is a gear or cog in that machine, meaning everyone has a purpose. Yet, as it's written and as it's acted, this point comes across as hackneyed and uninspired.

If this movie is wondrous or powerful in any way, shape or form, it's because of Martin Scorsese. His visuals, his direction, and his very spirit are what save this film, and his visuals are really all that can be taken away.

With the exception of Sacha Baron Cohen and Helen McCrory who plays Georges' wife, none of the actors here make an impression. No offense to Oscar-winner Sir Ben Kingsley! McCrory impresses with the heartbreak you see in her face as well as the look in her eyes as they're being illuminated with the light of a film projector. Cohen impresses with his comedic skills, which are brilliantly used. He of course gets all the laughs.

But, this is Scorsese's first ever film in 3D. This is also the first film I've watched from beginning to end in 3D. I attempted to watch Tim Burton's Nightmare Before Christmas in 3D back in 2006, but I left without finishing. It was one of the few times that I've ever walked out of a film. I simply didn't enjoy the post-conversion, but Scorsese's film was shot in 3D, as it was conceived in the format, and the difference is substantial.

I have to admit that I was skeptical and in fact resistant to see any movie in 3D. I thought it was just a gimmick to get more money out of movie goers, and, honestly, I still hold that opinion, but it cannot be denied that Scorsese creates something beautiful here. Almost every shot, every angle and camera move is beautifully crafted. Scorsese certainly knows how to compose scenes and fill them with a richness, which in many instances are helped or enhanced by the 3D effect. Other critics have remarked at the depth that each scene has, and that's certainly true, but, even if the 3D were absent, Scorsese's visuals should still be in the running for as many Oscars as possible, whether it's cinematography or production design.

Scorsese rarely, if ever, makes movies about children or that operate principally from a child's perspective, but since Hugo is arguably a Scorsese substitute, Scorsese is able to tell this tale from merely his own point-of-view, one that probably has not changed or deviated since he was that age as well. Much in the way that Super 8 was not only directed by JJ Abrams but also very much a reflection of Abrams' own childhood, not in any way autobiographically but more or less spiritually, so is Hugo for Martin Scorsese.

This is Scorsese's spirit on display here, his discovery of film and his falling in love with the medium and the artform. This is him being in awe of it, seeing it as magic, as something to behold and then ultimately something to treasure, and this is Scorsese trying to imprint that awe onto us.

Visually, Scorsese represents this. The opening ten minutes or so, which is a glorious overture, plays like a cartoon. Nowadays, cartoons are the entry for children into the world of film and TV. This logically becomes Scorsese's way of entry into this story for us. No, he doesn't start it off with actual animation, but, by the movements of the characters and the staging of things, as well as the CGI utilized here to help establish the environment, it feels like a cartoon. Some might argue, and I would agree, that Scorsese is also using the tricks or even style of early silent film directors with this overture.

Scorsese definitely gives us the history of directors of that early film era. Scorsese doesn't give us a detailed rundown, but we're introduced to men like Georges Méliès and the Lumière brothers. We're introduced enough to appreciate those film pioneers. Some might be critical, and again I would agree, that Scorsese rips off these pioneers perhaps too much. Scorsese would say most likely that he's paying homage to these men, but at least he doesn't hide that that's what he's doing.

Three Stars out of Five.
Rated PG for mild thematic material, some peril and smoking.
Running Time: 2 hrs. and 6 mins.