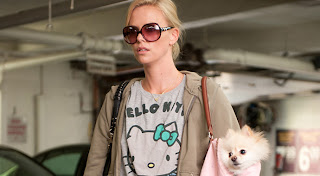 I simply don't know what screenwriter Diablo Cody was trying to say with this story. If it's about an adult who acts young, in the same vein as Arrested Development, then Charlize Theron who stars has literally been there, done that, but to greater comedic effect. From the information that Paramount Pictures provided prior, I was hoping for a less serious Fatal Attraction (1987), a woman who goes after a married man, only without the murderously psychotic tendencies. We don't get that. What we get is a more watered-down version, not quite the alcoholic punch of which it had potential.

Charlize Theron (Monster and The Italian Job) plays Mavis Gary, a 37-year-old, writer of fiction for young adults. She lives in Minneapolis. She has a lot of issues. They all stem from an incident in her past, which becomes a surprise reveal during this movie's climax. Those issues include alcoholism, promiscuity, materialism, selfishness and cynicism. Out of the blue, she gets an email as part of a mass email announcing the birth of a new baby. This baby is the daughter of Mavis' ex-boyfriend, Buddy Slade, played by Patrick Wilson.

Buddy Slade is a new father, living in suburbia. This is ground that Wilson has tread before. In Little Children, Wilson played a father of a little boy, a toddler in a suburban area who gets tempted into an affair with another new parent. Buddy Slade is tempted into affair as well. Except, he's not tempted by a new parent like him. He's tempted by Mavis who is his ex-girlfriend and who is far and away from having a child. Mavis can barely take care of her dog, a white Pomeranian.

In Little Children, the focus was on the affair and the effect, ultimately positive, that it had on the two. Young Adult is about merely the temptation, the so-called seduction, and its effect, ultimately negative, that it could have, not just on the two, but specifically on the one, Mavis. I suppose it could be argued that Mavis does realize something about herself by the end because of this temptation, but, an equal argument could also be made that she doesn't realize anything.

An argument could be made that in one scene her eyes are opened but then in a following scene her eyes are closed again. By the end, any resolutions or revelations are nullified or left up in the air, much in the same way that Jason Reitman's previous movie Up in the Air ends.

I wasn't a fan of Up in the Air, but it had a lot more going for it than Young Adult. There aren't enough funny characters doing or saying funny things. Theron and Wilson have an interesting dynamic that's amusing in its awkwardness and dramatic irony, but ultimately it doesn't go anywhere. The character that steals the show is Matt Freehauf, played by Patton Oswalt.

Oswalt is a comic that has been making a name for himself for the past 20 years. His ability to tell jokes has been proven, but most comics when transitioning into serious actor often have issues. Oswalt hit a home run with Big Fan, which is probably the wrong metaphor being that that film was about football, but Oswalt proved that he can hold his own as a serious actor. He continues proving it here.

Outside Oswalt, it's not as if there isn't anything that might make you laugh. It merely pales in comparison. I also became distracted with all the shots of box stores. I simply didn't know what I was supposed to glean from this movie. I guess it makes for a semi-interesting character study and Theron is a good actress who does a good job with this role. Sadly, it's just not enough.

Two Stars out of Five.
Rated R for language and some sexual content.
Running Time: 1 hr. and 34 mins.