Movie Review - The Adventures of Tintin 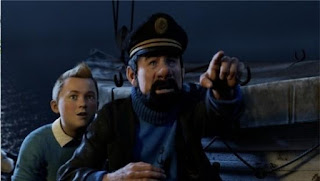 If 2011 in film can be defined with one word, that word would be nostalgia. The Adventures of Tintin is now the third film in a month that has this sense of nostalgia that is also strangely linked to French sensibilities. The Artist, which is nostalgic of the silent film era, was directed by a French filmmaker and stars a French actor. Hugo, which is Martin Scorsese's 3D film, is nostalgic of early cinema as well and is set in Paris and features a famous Parisian magician.

The Adventures of Tintin is based on a popular comic series by a Belgian artist. People from Belgium obviously speak French, but this film isn't nostalgic for the same black-and-white, nascent film era as The Artist or Hugo. The Adventures of Tintin is nostalgic for the same thing as the Indiana Jones movies. The screenplay is based on the 9th, 11th and 12th in the Tintin comic book series, the most popular and best-selling in the series. All of which are set in the 1940s, the same time period as Indiana Jones.

Even though Tintin is a newspaper reporter and not an archeologist, his adventures have him chasing historical artifacts, not unlike the character made famous by Harrison Ford. Tintin looks as if he were pulled from the Archie Comics, and he certainly could be an emancipated teenager, but, in all honesty, he must be older. Tintin has a job and his own apartment. He simply appears to be a boy.

Reportedly, Spielberg had bought the rights to the comic series back in the early 1980s, after having directed the first Indiana Jones movie, Raiders of the Lost Ark. Unfortunately, production of Tintin stalled for twenty years, giving Spielberg time to make three additional Indiana Jones movies, all the while having Tintin in the back of his brain. Spielberg had intended to shoot this movie live-action, but Peter Jackson (Lord of the Rings) convinced him to use motion-capture for the whole production.

Using the technology that Jackson and James Cameron (Avatar) had developed, Spielberg was able to direct this movie in a similar fashion as he would a live-action shoot, but technically this is Spielberg's first, feature-length, animated film that he's helmed. Under Amblin Entertainment, Spielberg has helped produce animated features including An American Tail (1986) and Who Framed Roger Rabbit (1988), the latter made by Robert Zemekis.

Zemekis has directed several animated films, using the same motion-capture process. The Polar Express and A Christmas Carol are two examples. Neither of them earned an Oscar nomination in the Best Animated Feature category. There's some controversy over whether motion-capture as a technique qualifies Zemekis and now Spielberg's movie as eligible animation. It will be a surprise if Spielberg gets the nomination in that category.

But, like the comics on which this movie is based, like with most animated films made mostly for children, The Adventures of Tintin is colorful and tons of fun. Teenagers and young adults will get a kick out of the non-stop action and thrills. Older movie goers will enjoy the film's humor, which has a sufficient amount of verbal and visual gags.

As I've noted over the year, with Kung Fu Panda 2 as an example, the animation provided by computers creates characters that seem very life-like. They certainly seem tactile. There was one shot in particular here where Tintin is in a boat and his arm is dangling over the side. The frame only contains Tintin's arm against the water. You don't see any more of him, and I swear that his arm looked like a real, human arm. The veins and the skin texture were completely photorealistic, and totally indistinguishable from a real person's arm.

With this detail, the only thing that kills it are the faces. Tintin's face as well as the faces of everyone else never quite rise above the level of cartoonish. It retains a great depth and tactile quality, but my suspension of disbelief still had its challenges. It's another step forward in mimicking photorealism, a step forward in making animation simulate live-action to the point of not being able to tell the difference, but we're not there yet. I suspect though that stylistically Spielberg wanted to keep with the look of the comic in many respects.

Because of the motion-capture technique here, Spielberg is able to do a myriad of things, in terms of camera angles and moves that he'd be limited in doing with Indiana Jones. His exuberance in that regard shows as almost every action sequence becomes extremely over-the-top. There's an action sequence every few minutes, so the movie is never dull, but it also becomes increasingly ridiculous until the end where two characters are literally fighting each other with huge cranes as if they were swords.

Spielberg utilizes several times some creative transitions, which consist of scenes blending into each other. If I hadn't seen a brilliant transition similarly done by Kelly Reichardt in Meek's Cutoff, but without the use of computers, I might have been more impressed. What did impress me was the jam-packed nature of the action sequences. One in particular was like a scene in Pirates of the Caribbean: At World's End, but amplified tenfold.

The crowning achievement is a Moroccan chase where Tintin is trying to get a hold of a bird. It's absolutely insane. First, Tintin is chasing a bird. He's being shot at with rifles and a dam bursts, flooding the streets and literally sending part of a building after him. If the thought of Indiana Jones trying to escape a huge boulder was boring to you, trust me, Spielberg blows that away.

Sadly, unlike a Disney or Pixar film, there is very little of an emotional connection that I could make with Tintin or any of the characters here. The central mystery revolves around a lost ship called the Unicorn and what happened to it and its captain. The mystery is revealed, but I feel like it's all done in a way that merely satisfies or justifies calling this movie Tintin. While there is a connection that's developed between Tintin and a drunken sailor named Haddock, it was a struggle for me to go with that friendship.