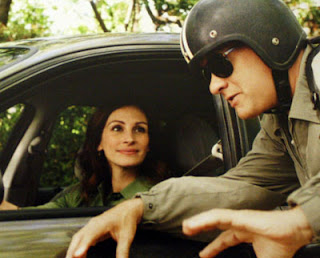 Hanks plays the titular character of Larry Crowne who loses his job at the start of the film. As a middle-age man who's only worked retail, he finds it difficult to find another job. He decides to go to community college because his firing is conditioned upon Larry not having a degree. Once in college, he logically takes an economics course but for no apparent reason he takes Speech 217, which is taught by Mercedes Tainot, played by Roberts.

While being his slubby yet charming self, Larry befriends a scooter gang that attempts to make him over. The scooter gang is supposed to be quirky, which it is, but, in terms of impact and presence, the gang feels pointless.

Wilmer Valderrama (That 70s Show) plays Del Gordo, a cool, sexy biker boy-type. You think that he's going to challenge Larry in some kind of weird love triangle thing or conversely that the two might become unlikely friends. While the threads are there for both situations, the movie doesn't go to either of them, which is a blessing and a curse. It's a blessing because that might have been the most predictable thing and the movie avoids that. It's a curse because it further creates a hollowness that I feel this movie has.

Larry tries to win over his professor, Mercedes Tainot. By the end, we're supposed to believe that Larry and Mercedes fall for each other. I didn't believe that for one single second. Larry is in her classroom, but their interactions lead us down a path to nothing. Then, about half-way to two-thirds through this movie, we get an awkward scene between them, which is meant to bring the two of them together, but it felt off and wrong.

What also felt off and wrong were some camera choices. Hanks puts the camera on the rear tail light of a car as his character drives it. It looks awful. It's hung on the screen for too long. I didn't get why Hanks chose it. I also didn't get Hanks' writing. His character is meandering and has no goal after he starts his classes. He has two classes that we see. His economics class is never paid off, so it's a wonder as to why Hanks devoted any time to it. Again, it's something that seems pointless.

Julia Roberts is a great actress, but I didn't buy her character's turn. She is so bitter and so cynical for so long with little to no glimpses of anything beyond that. When all of a sudden she wants to kiss Larry and then ultimately be with him, she's not given enough steps to make that journey. It's a leap that fails. We're not even sure why Larry is single. Yes, he's obviously divorced, but we're not led to understand why.

One Star out of Five.
Rated PG-13 for brief language and some sexual content.
Running Time: 1 hr. and 38 mins.