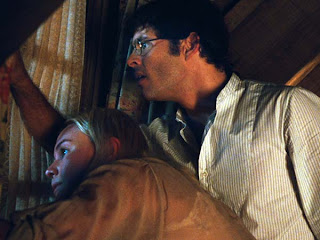 I wanted to see the original film starring Dustin Hoffman to get the tone that Sam Peckinpah set, but I didn't. Writer-director Rod Lurie's tone pushes toward horror, but it wants to be more, something more dramatic, more thrilling or psychologically intense. Lurie doesn't provide enough depth between key relationships to make that work though.

James Marsden plays David Sumner, a writer working on a movie about Stalingrad. Kate Bosworth plays his wife, Amy, an actress who accompanies him back to her home town of Blackwater, Mississippi, to renovate her family's house. Alexander Skarsgård plays Charlie, a construction worker and hunter who's working on the renovations. He's also Amy's ex-boyfriend, supposedly.

Lurie never makes the relationship between Amy and Charlie clear. Questions arise as to how long did they date or what broke them up. We have no idea what things were like between them, so it's difficult to understand either of their actions later on.

The movie plays on a lot of stereotypes on rednecks and southerners. I suppose the audience shouldn't take too much offense, as at least it's called out. Yet, a subplot involving a mentally-challenged man and his forbidden love for the high school football coach's daughter doesn't help in the stereotype department. There was an opportunity for nuance here, but instead the movie goes for all the clichés.

Skarsgård, however, is an actor to watch. This movie in many ways reminded me of Fear (1996), starring Mark Wahlberg. Wahlberg achieved being scary and sexy at the same time in that movie. He was someone who was attractive yet terrifying. Skarsgård achieves the same. Skarsgård is both sexy and scary here. Granted, it's a quality he's perfected on his TV show, True Blood, but he is particularly effective here.

There are also minor plot details as well as some thematic things that this version of Straw Dogs shares with Fear. One theme that this movie hypes is one of manhood and what is masculinity. The hackneyed ways that it explores that theme could have been tolerable, but Marsden may have been the wrong casting choice.

Marsden is supposed to be playing this Harvard-educated intellectual who doesn't believe in violence and guns. He plays chess but tries to avoid confrontation. It's not that he's a coward but comparatively-speaking he's supposed to be a wimp. Hoffman, given his stature and body type, easily passes this off. Marsden, nevertheless, has a manliness to him that doesn't quite work here.