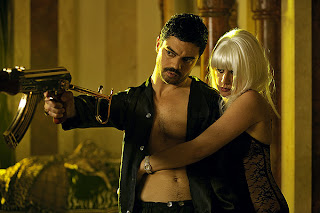 I just happened to be watching a Thanksgiving marathon of the comedy series Arrested Development on IFC. The series did an episode where the main character goes to Iraq and meets a group of men who look like Saddam Hussein and whose job it was to impersonate Saddam and act as decoys in cases of emergency like assassination attempts. It was funny when NetFlix then sent me this DVD of a real-life Hussein impersonator.

The difference is that the impersonator in this movie was not for Saddam, the former president of Iraq, but of Saddam's eldest son, Uday Hussein. If you're not into history books, HBO created a mini-series called House of Saddam, which depicted the rise of the Iraqi leader and why he needed impersonators. Consequently, it showed us why his son would also need an impersonator.

The Devil's Double allows us to get to know Uday's impersonator. His name is Latif Yahia. Yet, it's weird because even though this is Latif's story, it still stands as a looking glass into the insanity that was Uday, and through the looking glass we see how Latif loses himself and has to struggle with this personality that is thrust upon him.

Director Lee Tamahori interweaves archival footage of the Iran-Iraq War, perfectly setting the mood. He shoots in Jordan and through clever use of locations and CGI, he creates a crazy and decadent environment. We're taken from battle field to gilded cage very smoothly. Screenwriter Michael Thomas lays out all the elements for what has been described as the Scarface of the Middle East. Yet, as the title suggests, the level of evil is far greater.

Nothing is greater though than the performance of Dominic Cooper who does double duty by playing both Latif Yahia and Uday Hussein. Yes, their resemblance was uncanny, thanks in part to some altercations, but they weren't exactly twins. Tamahori, nonetheless, chooses to handle this situation, much in the way that David Fincher handled Armie Hammer in his dual role for The Social Network.

Hammer merely scratches at the surface of what Cooper digs into so deeply. Cooper creates two distinct characters, two distinct personalities, and two distinct human beings, so much so that at times, he was able to convince me that there were not just one but two actors. It's odd because it then crescendoes into not being able to distinguish between the two, yet somehow still distinct. It's an uneasy balance.

As I listened to the DVD commentary and watch the behind-the-scenes features, I saw the effort put into making the two characters seems real, when together. I was never truly convinced, and if I were directing this film, I'd be too tempted to hire two actors because of the lack of interaction inherent with having only one.

Even with the slight disconnected quality, Cooper still is able to touch himself and unite these two characters intimately. At the same time, Cooper has to take both these men on their own individual arcs. Latif who is stripped bare, literally, and who is broken mentally, has to be built back up. It's like Extreme Makeover: Dictator's Son Edition. Meanwhile, Uday who is on top of the world has to spiral, first out of control and then rapidly downward. Cooper has to juggle both and I don't believe he drops the ball.