DVD Review - Song of the Sea 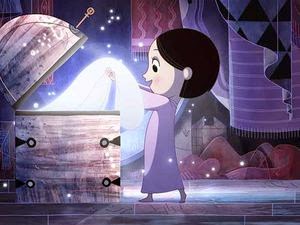 This film was nominated for the Academy Award for Best Animated Feature. It was the least talked-about and probably the least seen of all the nominees. It lost to Disney's Big Hero 6, but it's clear that it should have won. It's funny because there are elements that are similar to the other nominees, meaning How To Train Your Dragon 2 and The Tale of the Princess Kaguya. Yet, this film, directed and co-written by Tomm Moore, is a thousand times more dazzling and a million times more wondrous than both.

On the DVD commentary, Moore talks about his desire to maintain the hand-drawn process and make the images on screen look as if they were animated from paper, or as if each frame were a page in an actual storybook for children. There's also a bubbly aspect to the whole thing, literally a lot of circles, a lot of circular shapes and simple, curved lines. Moore also comments on his use or his approximation of watercolors.

At the heart of this movie, it's a fairy tale. For the past decade or so, Disney has been recreating a lot of fairy tales in live action form. It's even added to the film library with such titles as Tangled (2010) and the blockbuster hit and Oscar-winning Frozen (2013). However, this movie upends all of Disney's efforts with something so simple as basic child-like awe and fantastical beauty.

Like with many fairy tales, it focuses on a character who has lost a parent. This one has a 10-year-old named Ben, his younger sister Saoirse who is mute and his faithful dog Coo. They live in Ireland inside a lighthouse atop a cliff with Ben and Saoirse's widowed father, Conor, voiced by Brendon Gleeson. Conor is obviously the lighthouse keeper. Conor's mother, the Granny to Ben and Saoirse, visit to help care for the family. Conor's wife, the mother to Ben and Saoirse, died in childbirth. In fact, she disappeared into the sea while pregnant. Conor was able to pull baby Saoirse out the water, while toddler Ben watched in horror.

The adventure kicks off when Saoirse discovers a magical coat that her mother left for her. This coat reveals Saoirse to be a mythical creature known as a Selkie. According to Celtic lore, a Selkie is a seal-turned-human. It's almost like a mermaid or a Siren, except when Selkies sing, it isn't to lead men to their doom. A Selkie's singing leads to the release of emotions, emotions that might not always be good but are necessary for life.

The chief antagonists in this film are two old women. One ends up being Ben and Saoirse's own Granny and the other is Macha, an actual witch that looks like she's part owl. In fact, she controls a parliament of owls who do her evil bidding. Her principal power seems to come from a curse that was also put on her. In order to avoid painful emotions like that of loss, Macha can take away all emotions from a person, which also turns that person to stone.

There's a race of fairies who try to fight back against this witch, but many of them have failed and been turned to stone. There are also really intriguing and funny, magical beings other than the fairies and Selkies. One of which is the Great Seanachai who has the longest hair of any life form, including Rapunzel. Each of his strands of hair possesses a story or memory, yet he himself has a very bad memory.

When the Selkie is in her full glory, it's an amazing display and is perhaps better viewed on a huge screen or with the best HD quality monitor possible. It truly is the best animation I've seen in several years. As intricate and as richly detailed as How To Train Your Dragon 2, which also has a boy dealing with the death of his mother, this film trumps it. As unique and fanciful as The Tale of the Princess Kaguya, which also is about a magical little girl who has to choose to stay with her human family or go with her magical family, this film trumps it too.