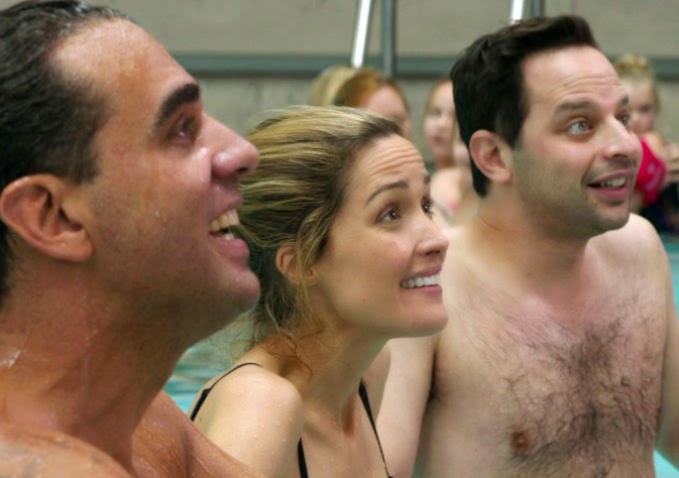 Nick Kroll (The League) stars as Jake. When we first see Jake, he's the pitchman in a video promoting a new tech device called "Mind's i," a device very similar to Google Glass. It's not clear if he's the inventor. He's certainly the leader of the investment party being held at his friend's Hudson's apartment in Manhattan. He's certainly the one who has wrangled all these people to give their money for "Mind's i." During the party, Jake gets a call saying that the manufacturer fell through and all the investors have basically lost their money.

Rose Byrne (Bridesmaids) co-stars as Justine, the sister of Jake. She's a teacher who lives in the suburbs with her husband Danny and her 3-year-old son Teddy, while also being pregnant with her second child. She lives in her parents' old home, which she's trying to sell. Her father lives in Florida with his second wife. Her mother passed away from cancer. She is surprised when Jake shows up on her doorstep needing a place to stay because Jake has not been around, not even for their mother's sickness and death.

Directed by Ross Katz, this film reminded me of the recent The Skeleton Twins (2014) with Bill Hader and Kristen Wiig. That movie was also about a brother and sister who are estranged but a tragedy befalling the brother forces him to move in with her, and forces them to deal with past issues and become further bonded. Like that movie, this one also has marital problems between the sister and her husband, such as an affair. The Skeleton Twins is darker than this but ironically funnier.

Strangely, despite playing brother and sister, Kroll and Byrne have really good chemistry. I believe they could be brother and sister, but I believe more that they could be lovers. They fit so well together, but screenwriters Jeff Cox and Liv Flahive never give them enough comedic moments to shine. Cox and Flahive introduce potential for hilarity with the swimming lessons to which the title refers. Yet, Cox and Flahive don't give Kroll and Byrne enough to do with it. It's supposed to build to a point where the two go under water, despite their fears, but that point felt unearned.

In that same vein, the movie doesn't give its guest stars enough to do either. Comedians or comedic actors like Mike Birbiglia, Bobby Moynihan and Jane Krakowski are essentially wasted. Certain actors like Sarah Steele and Joel McHale who plays Hudson are still able to shine, despite being given so little. However, another missed opportunity was the casting of Josh Charles (Sports Night and The Good Wife). It might be just me, but Kroll and Charles could play brothers. To me, Nick Kroll looks like a shorter, pudgier and slightly less handsome version of Josh Charles.

There are a lot of really adorable scenes between Jake and Teddy. The actors, Caleb and Matthew Paddock, playing Teddy are absolutely cute and Kroll has a lot of fun with them. Yet, I must make mention of Ross Katz who is from my hometown of Philadelphia.

He was producer of a really great and funny, gay film called Trick (1999). He was twice nominated for the Academy Award for Best Picture for In the Bedroom (2001) and Lost in Translation (2003). He was four-times nominated for the Emmy, once as the producer of The Laramie Project (2002) and three times as producer, writer and director of Taking Chance (2009). He won the DGA Award and the WGA Award for Taking Chance. He also won the Spirit Award for Lost in Translation.

This film is his feature, directorial debut. Obviously, Katz has had a great career so far, so I look forward to what he does next and continued good work from him.

Three Stars out of Five.
Rated R for language and some drug use.
Running Time: 1 hr. and 32 mins.