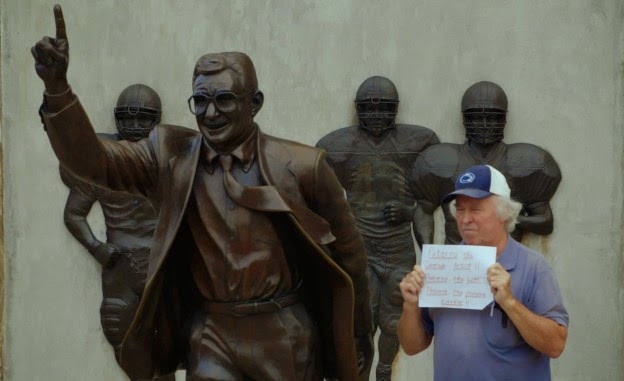 This documentary follows the Jerry Sandusky trial and the penalties that befell famed, football coach Joe Paterno and the school for which he worked, Penn State University. There are two major story-lines occurring here. The first is the arc of Matt Sandusky who is the adopted son of Jerry Sandusky. We learn whether Matt comes down on the side of his adopted father or against him when the allegations of child rape where levied on Jerry Sandusky. The second storyline is the arc of Paterno's legacy. The first storyline is a straight-forward journey that we are compelled to watch because director Amir Bar-Lev sits Matt Sandusky down and lets us look into his eyes and hear him. The second storyline is a bit more contentious and Bar-Lev allows it to play out.

Paterno's family gets an open platform. His two sons, Jay Paterno and Scott Paterno, have plenty of screen time. His wife, Sue Paterno, has a good chunk of screen time. There's also a lot of coverage given to the students who blindly support Paterno regardless of anything. By the end, however, Bar-Lev is able to undermine all of it.

According to the Freeh report, it can be stated that administrators at Penn State, including Joe Paterno, were made aware of Sandusky's crime of child rape, which took place on Penn State's campus, according to Mike McQueary. Yet, those administrators decided not to do anything. For a decade, they did nothing, allowing Sandusky to continue to get away with his crimes. When Sandusky was arrested on November 5, 2011, and all of this came to light, those administrators were fired, but it was Paterno's firing that sparked the most outrage and protests from students.

Bar-Lev lays out why. Paterno is revered as a god or as royalty in State College, Pennsylvania. He's put on high because of his record as a football coach, and, as it's depicted here, his football record is more important than the welfare of the children who were abused and raped.

This is exemplified in the interview of one of the college students. Bar-Lev interviews Tyler Estright, class of 2013, who joined in the protests to Paterno's firing. Estright says he hates having to say he feels sorry for victims. He indicates that he says he feels sorry for the victims only out of some kind of obligation or political correctness not out of actual sincerity or empathy.

One thing that Estright and Paterno supporters use in their defense is the penalty of the NCAA, which was extreme and possibly unprecedented. It gave those behind Paterno and the Penn State protests fuel to cloak themselves in a kind of victim-hood that is in no way comparable to the actual victims of abuse and rape for whom they all don't care.