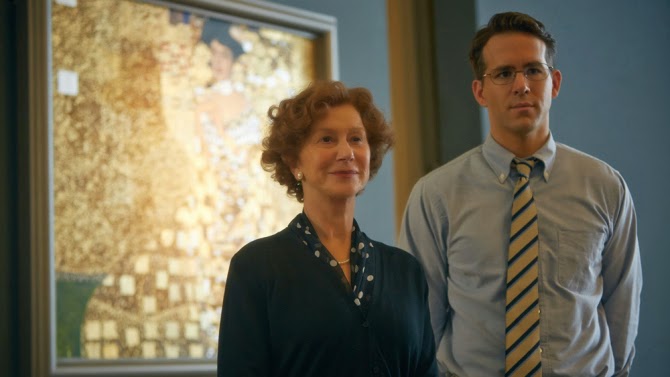 Helen Mirren stars as Maria Altmann, a Jewish woman who escaped Austria around the time of World War II when the Nazis took control of the area. She goes to live in Los Angeles with her sister and runs a clothing boutique. About fifty years later or so, and after her sister passes away, Maria becomes aware of a painting that belonged to her family that was stolen by the Nazis and is now in the possession of the Austrian government on display in an art gallery called the Belvedere Museum.

Ryan Reynolds co-stars as Randy Schoenberg, an up-and-coming lawyer in Los Angeles who is a descendant of a powerful and influential family not in California but in Austria. He's very much like a Jewish Clark Kent in his appearance and behavior. He does have a wife Pam, played by Katie Holmes, and a child, but Randy is a bit struggling. He tried starting his own practice in Pasadena, but it failed, so he applies at a high-powered firm in L.A.

Maria hires Randy to help her get possession of the painting from the Belvedere. After realizing the painting is worth millions, Randy is able to convince his firm to let him go to Austria to get the painting back. While there, Randy meets a reporter in Vienna named Hubertus Czernin, played by Daniel Brühl. Hubertus tells Randy that the painting is called "Woman in Gold" and it's considered the "Mona Lisa" of Austria.

That description is not totally accurate. "Woman in Gold" wasn't made by a Renaissance painter in the 15th century. "Woman in Gold" was made in the 20th century and is a portrait of Maria's aunt named Adele Bauer. What makes it special and valued similarly to "Mona Lisa" is because it was painted using what seems like actual gold. When Maria arrives in Vienna, she starts to remember her life leading up to the moment when she had to flee the country, which coincided with the Nazis stealing the painting.

Tatiana Maslany (Orphan Black) plays young Maria Altmann in the flashbacks, which aren't brief. The life of young Maria becomes a significant B-story plot. Maslany is able to give us a fully realized character. She marries a handsome, opera singer named Fritz, played by Max Irons. We see her in love. When the Nazis invade and start mistreating Jewish people, we see her courage, strength and fear as well. When her husband comes up with a plan to escape, we see her feel the loss and heartache of leaving her friends and family.

Given the worldwide conflicts, the ideas of restitution or reparation, as well as the issue of immigration in the United States, there is great relevance here, of characters experiencing displacement and having to find a new home in a foreign land that Mirren brilliantly portrays. Director Simon Curtis does a good job of giving Mirren her space to breath life in this real-life story. He also crafts a pretty thrilling if brief chase scene of Maria and Fritz escaping Austria that is a nice dab of action and adventure in what becomes a legal drama, one that goes to the U.S. Supreme Court.

Reynolds does a good job too of a young man who is uncomfortable with his lineage at first but who eventually has to learn to accept his roots. He's great with Mirren as well, as each has to push each other at various times. There's interesting chemistry there, although Mirren is so good and proves her win of the Oscar that she could have chemistry with any one. Holmes even gives a good performance. The scene of her water-breaking while pregnant was a great scene that she delivered well if not comically, opposite Reynolds.

Maybe because this film was also distributed by the Weinstein Company, it reminded me of Philomena (2013), as both movies concern an older woman and younger man banding together to unearth some history. It's what The Monuments Men (2014) would have been if it weren't a caper, and instead people utilizing the court system. Maybe because this film also starred Helen Mirren, it reminded me of The Debt (2011), but again with far less action.

Five Stars out of Five.
Rated PG-13 for some thematic elements and brief strong language.
Running Time: 1 hr. and 51 mins.