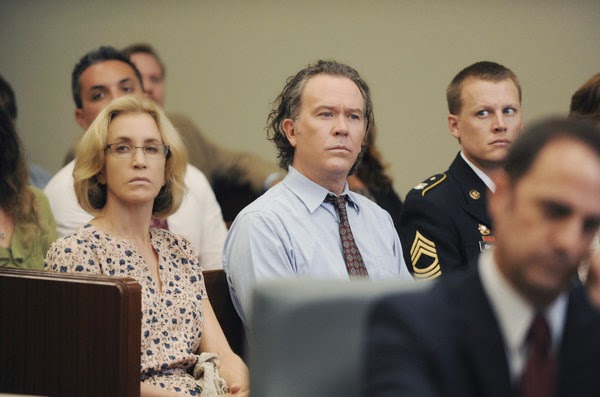 John Ridley won the Oscar for writing 12 Years a Slave. He is now the writer and director of this series, a crime drama that fits into the recent trend of a mini-series or limited-run series that isn't a procedural that tackles a new case week-to-week but instead takes one case and spreads it out over a half-dozen or so episodes. It's not necessarily about the mystery of who committed the crime and if that person will be caught. The show is otherwise, if not mainly about complicated family relationships, then, in this case, about some greater social issues. Ridley uses race relations as the greater social issue, but he doesn't go about it in a way one might expect. As a black man, one might expect he would address racism against black people and for that to be at the forefront. Yet, Ridley doesn't do that. He comes at it in a more clever fashion.

Oscar-winner Timothy Hutton (Ordinary People and Taps) stars as Russ Skokie, a father who arrives in Modesto, California, to identify the body of his adult son, Matt. Russ positively identifies Matt's corpse and learns that Matt was murdered, while Matt's wife was brutally beaten, seemingly raped and left comatose.

Oscar-nominee and Emmy-winner Felicity Huffman (Transamerica and Desperate Housewives) also stars as Barb Skokie, the mother of Matt who is divorced from Russ. Later, we learn it was due to Russ' substance abuse problems. Barb then raised Matt and his brother Mark in desperate circumstances. Those desperate circumstances, perhaps combined with other things in Barb's past, makes her fiercely protective and a little bigoted.

Benito Martinez (The Shield and House of Cards) co-stars as Alonzo Gutierrez, a mechanic and the owner of his own garage, a legitimate car repair. He is very protective of it and his two teenage children. He's been widowed for nine years, so he's even more protective. He doesn't like his daughter Jenny, played by Gleendilys Inoa, hanging out with boys, and he doesn't like his son, Antonio or Tony, played by Johnny Ortiz, hanging out with certain boys either. Alonzo has some bigoted ideas about illegal or undocumented immigrants, despite being of Mexican descent himself.

Elvis Nolasco co-stars as Carter Nix. He's arrested on the charge of murdering Matt and possibly assaulting Gwen. He's in love with Aubry, played by Caitlin Gerard. Prior to Carter's arrest, both he and Aubry were meth addicts. There were struggling for cash and accommodations. Aubry had resorted to prostitution. After the arrest, both of their families rally around each and try to keep the two separated.

Aubry's family wants to get her clean of drugs and Carter's family, particularly his sister Aliyah aka Doreen Nix, played by Regina King (227 and The Boondocks), wants him released from prison and hopefully acquitted of the murder and assault charges. Related to the crime is Hector, played by Richard Cabral, who was also arrested. The series also follows his experience in the criminal justice system and his gang from which he tries to separate himself.

Again, given the pace of the series, solving the crime doesn't seem to be the immediate goal. The trial of Carter, which seems like where the series is building, might be adjudicated and whether or not he's convicted might be resolved within this first season. Yet, the show is more about how these characters deal with each situation and moment, as well as the performances of the actors are what seems to be paramount in Ridley's mind. This is more or less a vehicle for his actors, giving them compelling dramatic moments, which might explain his perpetual use of close-ups.

The most galvanizing character is Felicity Huffman's Barb who has overt and ostentatious, racist tendencies. She's off-putting, but she's also a mother in mourning and fiercely fighting for her son or at least the idea of him in her head. When it comes to other characters, Ridley is able to peal back the layers or pull the curtain on certain things, as he slow burns the judicial process. Unlike other shows, it's not from the perspective of cops or law enforcement.

In addition to the actors mentioned, Lili Taylor plays Nancy Straumberg, an advocate who advises Barb. In Episode 4, she's given a great monologue about how superficial and materialistic things can be unfortunately effective in court. This follows a great monologue from Aliyah who is Muslim and how she rejects materialism equating it to a form of slavery. It's an interesting juxtaposition.