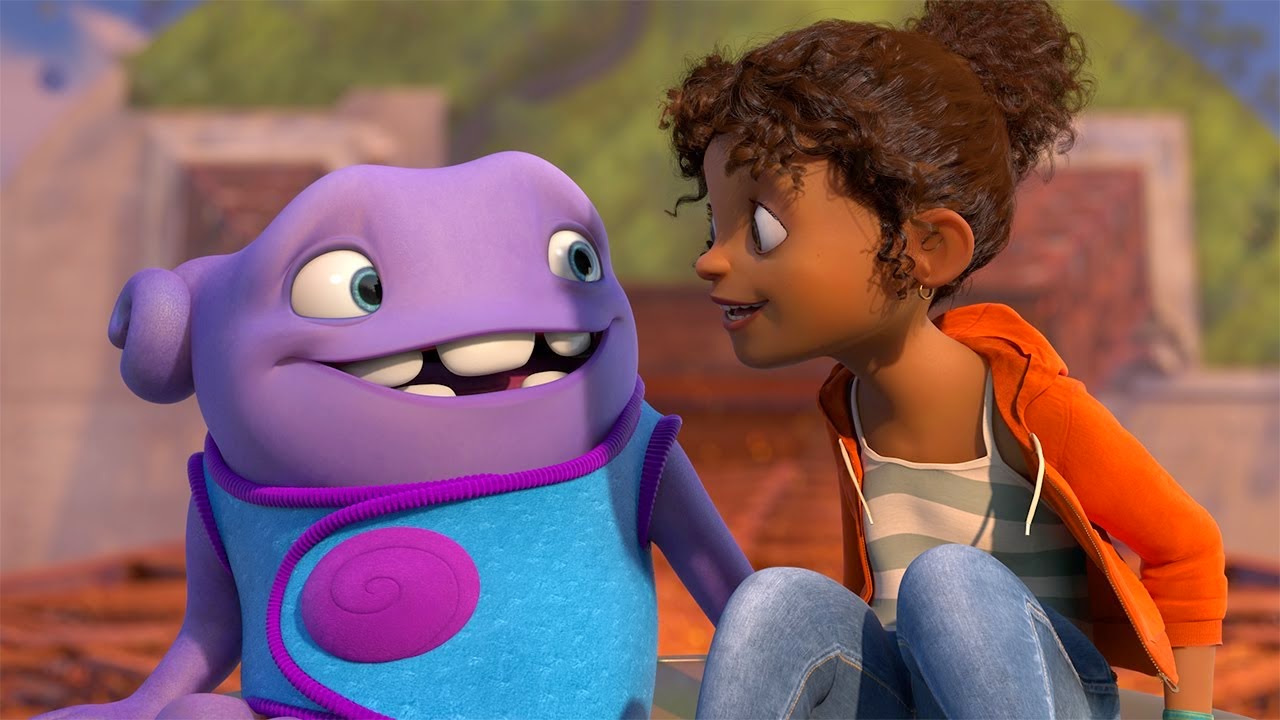 Based on a book by Adam Rex, it's a likely adaptation for DreamWorks, but the cynical side of me sees it as an easy marketing tool for toy manufacturing. Much in the same way the minions from Despicable Me broke out as cute, little creatures for children to have or the aliens from Toy Story (1995) became cuddly play-things, the characters in this movie are simply meant to be adorable for little kids. In that, the movie succeeds in being colorful and squeeze-worthy.

Rihanna voices Tip, a young girl who is abandoned after her mother and the entire planet is abducted by aliens. What is cool is that the animators patterned the character after Rihanna herself. She's a girl from Barbados. She has brown skin and green eyes, and it's great to have a protagonist in an animated feature who is a girl of color. She's smart and brave and lovely, and she's wonderful to follow.

Jim Parsons voices Oh, the alien who is a bit of an outcast amongst his fellow aliens. He comes from an alien raced called the Boov. They're short and purple, but their skin is like a mood ring. Their skin changes color depending on their emotions. They have six little, sponge-like legs. They have advanced technology, the ability for interstellar travel, but all the technology is bubble-based and suction-based. Their spaceship is a giant bubble in fact.

The Boov come to Earth and invade. They abduct all the humans and transplant or rather dump them all in Australia. Six billion people are crammed on one continent, the smallest continent in fact, while the Boov take over the other continents and make all the cities their homes.

The Boov are content to stay forever, except Oh accidentally sends out an email that alerts another alien race called the Gorg. The Gorg is a race that has been pursuing the Boov, but there is no explanation as to why. The threat of the Gorg coming to Earth force the Boov to leave, but, prior to that, there's a bit of a disconnect for the Boov as to the ethics of what they're doing and even afterwards there's still no acknowledgment.

It's interesting that writers Tom J. Astle and Matt Ember chose Australia as the place where all humans would be re-located. Australia, historically, was a penal colony for Great Britain. It's an amazing country now, but it was for a time seen as a refuge for criminals. For centuries, colonists, mainly from Europe, have done this exact thing, displacing indigenous people and stealing lands and veritable homes. It happened with the Native Americans and arguably it happened with the Aborigines in Australia.

It happens here in this movie and the filmmakers seem ignorant or indifferent to the historical parallels. In time, the Native Americans and the Aborigines learned to forgive and accept what happened, but one would hope for some acknowledgement. Tip definitely makes clear what happened and how it was wrong, but the rest of the Boov never do.

The movie instead throws in the threat of the Gorg as a big bad villain, but the struggle should have remained between the humans and the Boov. Mainly, it's because the Gorg are a non-presence throughout the film. Tossing the Gorg into this makes the ending feel superfluous.

Two Stars out of Five.
Rated PG for mild action and some rude humor.
Running Time: 1 hr. and 34 mins.