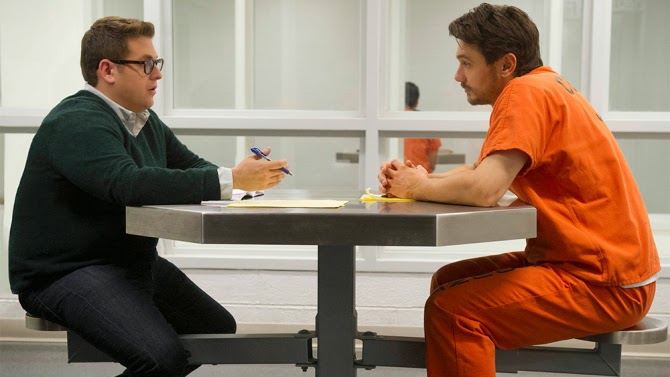 Oscar-nominee Jonah Hill (Moneyball and The Wolf of Wall Street) stars as Mike Finkel, a journalist working for The New York Times. He has remarkably written ten cover stories for the company's magazine. His latest is a story about enslaved children in Africa. Yet, his editors question the veracity of that story. It leads to a scandal, not as big but similar to the one observed in Shattered Glass (2003). Mike didn't outright lie and fabricate things completely, but he did fudge the facts.

Oscar-nominee James Franco (127 Hours and Milk) co-stars as Christian Longo, a family man struggling financially. He lives in Oregon and his main job is a Starbucks barista. However, Christian is arrested and charged with the murder of his wife and three, small children. In fact, the horrifying, opening image of the film is that of a child stuffed in a suitcase as it's about to be dumped into the ocean and that child is Christian's daughter.

Christian says he's a fan of Mike's writing and through a bizarre incident of identity theft, Mike starts to visit Christian in county jail. Mike interviews Christian, believing that he can turn these interviews into a book. It's at that point that the movie ceases to be Shattered Glass and becomes like the Oscar-winning film Capote (2005), and Jonah Hill becomes a poor man's Philip Seymour Hoffman.

Oscar-nominee Felicity Jones (The Theory of Everything and Like Crazy) co-stars as Jill Finkel, the wife of Mike who lives and works as a teacher in Montana. She becomes worried about Mike who starts to obsess over Christian and the case. The key issue at hand is if Mike believes Christian is innocent of the crimes. She's not given much to do, but Jones does deliver one fantastic scene opposite Franco that is probably the best scene in the film.

The second best scene is a monologue delivered by Franco, as Christian testifies during his trial. It's not particularly showy or has Franco running through a range of emotions, but, written by Rupert Goold and David Kajganich, it's more interesting to think about in retrospect. Directed by Rupert Goold in his feature debut, it's also a more pointed critique of people's fascination with murder and murderers whether it's on television, in books or else it's in music.

Five Stars out of Five.
Rated R for language and some disturbing material.
Running Time: 1 hr. and 40 mins.