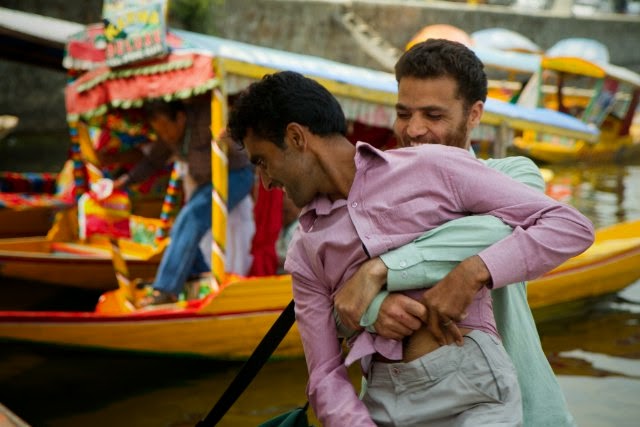 The titular valley is the one that is Kashmir. Kashmir is a predominantly Muslim country that's in between India, Pakistan and China. At the center of Kashmir is a huge body of water called Dal Lake, which is a major tourist attraction and also a major sufferer of pollution due to the population influx. Kashmir is also in the middle of a serious and at times violent land dispute. The Indian government controls the area with its military, but Pakistan insurgents rebel against that government and military.

This film was actually shot on Dal Lake in 2010 during a time when the insurgency was at a high in terms of the violence. Writer-director Musa Syeed who lived on the lake for a year and whose father is from Kashmir captures some of that insurgency on the periphery. Syeed has a history of making PBS documentaries, so capturing real-life is something he's good at doing. The film premiered at the 2012 Sundance Film Festival and it won the Audience Award for World Cinema - Dramatic. It also tied with Robot & Frank to win the Alfred P. Sloan Prize, the award for films with science and technology themes or with scientists as main characters.

Syeed has this film take place almost entirely on the lake. It stars Gulzar Bhat as a shikarawala, which is a man who runs a type of boat that is common in Kashmir, a boat that's used for all kinds of work, including being a ferry for tourists. Bhat is not an actor. He's an actual shikarawala who Syeed hired to be his protagonist.

His best friend in the movie is Afzal, played by Mohammed Afzal, an actual actor. Afzal is not a shikarawala. He gets work and makes money through more insidious ways. His ultimate goal is to leave Kashmir. Afzal hopes to save enough money to get out of the country. He's either tired of the extreme poverty or the extreme politics, meaning the Indo-Pakistani disputes.

One of those disputes forces the government to enforce a curfew, which prevents Afzal from leaving. The curfew lasts only a week. When that week is over, Afzal wants to go and flee with Gulzar by his side. Gulzar wants the same, but while they wait, we see why they're best friends.

Syeed depicts what can only be a total bromance. Gulzar and Afzal go swimming together. They exercise shirtless. They go boating. They tease each other verbally and with horse-play. They fish. They play cricket. They even sing a love song to each other. They hold hands while walking, which is most likely a cultural thing, not anything specific to them. They also share a bed and sleep side-by-side. It's not implied that anything sexual will occur. Their sharing a bed is more a result of the extreme poverty and people having to live in shantytowns and shacks with no indoor plumbing or bedroom space, so they have to be crammed together.

Neelofar Hamid plays Asifa, the female scientist who earned this film its Alfred P. Sloan Prize. Asifa is doing research and studying Dal Lake. Syeed crafts several sequences where Asifa is drifting on the lake in Gulzar's shikara, looking at the lake, what's happening to it and taking scientific samples.

These sequences are what probably earned the film its nomination for the Independent Spirit Award for Best Cinematography. The camerawork perfectly captures the beauty and ugliness of Dal Lake, as well as painting a great picture of the life and lives on that water, the impoverished lives.

The major conflict involves Gulzar falling in love with Asifa and him starting to divide and subtract his time with Afzal. This makes Afzal seemingly jealous. Syeed doesn't give Gulzar and Afzal much dialogue beyond the superficial, so we don't know the true depth of the bromance. We just accept it at face value. It's ironic because his tourist boat is labeled "No Time for Love."

Afzal is given the same choice given to countless fictional characters over the centuries. Does he stay or does he go? We're not even sure where he would go or what he would do for work. Though it might not seem obvious, Syeed forges an argument of why for better or worse Kashmir is home.