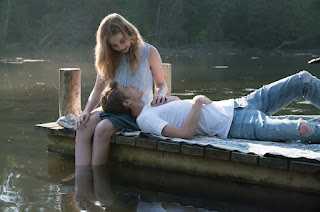 The difference being is that the gimmicks in the previous movies were designed to reveal something about the specific characters. The gimmick here is meant to reveal something aspirational about humanity. Nothing is really revealed about the characters here at all. This movie is also an example of the film trope of the Manic Pixie Dream Girl or Manic Pixie Dream Boy. Here, it's actually a Manic Pixie Dream Spirit. The problem is that the film trope is supposed to teach or change the protagonist in some way, but here the protagonist simply goes from having a black boyfriend who's distant and isn't as intellectual to a white boyfriend who's more doting. 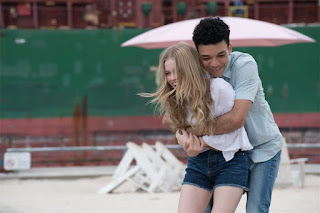 Angourie Rice (The Beguiled and The Nice Guys) stars as Rhiannon, a beautiful, teenage girl who lives in the suburbs of Baltimore. She has a boyfriend named Justin, played by Justice Smith (The Get Down and Paper Towns). At first, she's sending him a ton of text messages that he doesn't return. She wants to spend time with him and connect with him on deeper levels, but Justin isn't engaging her in that way. He just wants to hang out and hook up, and not put in too much effort. It's not clear how long the two have been together or what caused them to start dating in the first place, but she perhaps has a confidence or self-esteem issue because it's so obvious that their relationship isn't solid. Yet, she's so smart that it's weird why she would even spend one day as his girlfriend.

However, one day, Justin's body is taken over by a spirit that calls itself "A." Apparently, A is the same age as Rhiannon but every day, A wakes up in the body of a different person. The different person has to be the same age and in the same geographic area, probably within a 50 to 100-mile radius. A can only stay for a day and A can never be the same person twice. A thinks that A originated in Phoenix, Arizona, but A has no clue who A's original family was.

When it comes to those rules, one of those rules gets challenged, but it's a wonder why the other rules aren't challenged or questioned at all. Unfortunately, the movie doesn't spend too much time in A's point-of-view. The movie is mostly told through Rhiannon's perspective, so what A is truly experiencing is a bit lost, which is a failing in this film but endemic to the Manic Pixie Dream Girl trope. For example, A has the ability to stay in one body for more than one day, but it seems as if A never thought to do that until Rhiannon suggests it, which doesn't seem believable at all.

While A is in Justin's body, A spends the day with Rhiannon being the best boyfriend ever. What the movie fails to point out is that unlike Justin, A can be the best boyfriend ever because A doesn't have any obligations. Justin has tests, sports to practice and his family obligations. A doesn't have that, so A can ditch or abandon things to focus all attention to Rhiannon. The movie does eventually shine a bit of light on that fact, but it's sad that Rhiannon doesn't realize that herself and A has to be the one to explain it to her. 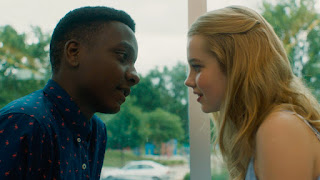 All that undermines the foundation of their relationship is obvious from the start but the movie stretches the relationship longer than it should. The only purpose is to explore the idea that the physical body doesn't matter. People should fall in love with the spirit. The message seems to be that it's not what's on the outside that counts but it's what on the inside that counts. This is a message that we learned in Aladdin (1992), but this movie wants to reinforce that idea.

"A" could be representational for them, but, as was said, this film isn't told from A's point-of-view. This movie is told from Rhiannon's perspective. If this movie were simply going from body to body and being every gender and sexuality and race, watching A be both boyfriend and girlfriend to various people, then this movie would be a triumph of true fluidity of sexual preference and expression with a question of how our identities may or may not be defined by those external things.

Sadly, Sucsy either himself or through his writer misses that opportunity entirely in favor of a rather bland, monogamous pairing that ultimately only reinforces a hetero-normative coupling. The movie flirts with the possibility of a queer relationship or a same-sex romance when A inhabits the body of a girl. However, when it's time for Rhiannon to take off her clothes and get into bed with A, which happens a couple of times, A is always a white boy. 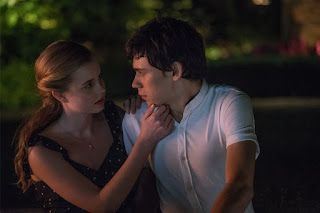 Owen Teague (It and Bloodline) plays Alexander, the white boy inhabited by A who is the sexiest of all the boys that A inhabits in this film. Of course, this is the boy with whom Rhiannon decides to go to bed and possibly have sex. There's the scene where we see Alexander shirtless. He's so attractive and perfect that it becomes obvious that he's the one that Rhiannon should have permanently, which is ultimately boring. The diversity of people we see are needlessly tossed aside, and it's a shame.

Even though it's not the same, Quantum Leap was a better story about someone inhabiting the lives of others, or Star Trek: The Next Generation did an episode in its fourth season called "The Host," which was also a better story about a spirit inhabiting other bodies and lives but being in love with one girl. Those were science-fiction shows that dealt with this premise a bit more interestingly than this.