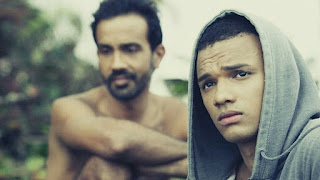 Every year,  nearly a hundred countries submit one title to compete for the Oscar for Best Foreign Language Film. In December, the Academy determines the top-ten percent of those titles and creates a shortlist, which is usually nine entries. Last year, one of those entries was The Wound (Inxeba), the submission from South Africa. That film was the one film that jumped to my mind, while viewing this feature from writer-director Maria Govan. It mostly follows a group of black boys who are engaged in a cultural ritual that's mainly religious, which conflicts with certain, personal expressions, including that of homosexuality. Through which, we get a glimpse of the strict observance to traditions, how it can be a celebratory and joyous thing but also how it can be the source of bigotries and repressions.

Govan sets her story, not in South Africa, but in Trinidad and Tobago, an island off the coast of Venezuela. Trinidad is actually the southern-most island of the Caribbean islands. People in Trinidad are mainly black, Indian or some multiracial combo and speak some patois or creole that one associates with Jamaica or the Bahamas. It's also a very Catholic country, and like many countries where Catholicism is dominant, the Trinidad people have Carnival, which is the time before Ash Wednesday and Lent. Carnival is a series of parties and parades where people get to binge and revel, usually with colorful costumes and exuberance or excess. 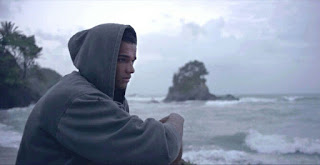 In the United States, it's generally referred to as Mardi Gras. For those in Trinidad though, the costumes are especially important, and one of the most popular costumes is the devil. There are all kinds of devil costumes. One such is the Jab Molassie, which consists of a person covering themselves in molasses or grease and mud. In Trinidad, there is a village in the northwest called Paramin, about a half-hour north of Port of Spain, the Trinidad capital city. In Paramin, the people there have a specific type of Jab Molassie called the Blue Devils, which has wearers apply azulillo to color their skin. It's similar to the white mud applied to the skin during ulwaluko in The Wound. In fact, the image of two boys in azulillo is what opens Govan's movie.

Petrice Jones (Step Up: High Water) stars as Gregory White, a 18-year-old living in Paramin. It's a week or so before Carnival. Gregory or Greg is finishing up school. He lives with his grandmother who wants him to study medicine and become a doctor. Yet, she supports him in his pursuit of more artistic endeavors. Greg likes photography and acting. Greg is actually the star of a play in Paramin at the start. His life changes or he's opened to new possibilities on the last night of his play when he meets an attractive, older man.

Gareth Jenkins co-stars as James Young, a man possibly in his late 30's or early 40's. He runs his own design and construction company. He studied in England but came back to Trinidad. He has several homes and drives a Mercedes-Benz. He's married and has a daughter who's the same age as Greg and in the same play. James is enchanted by Greg and begins to romance him. His connection to Greg is through a camera, which reminded me of the sweet, supportive and tender connection made between two men in My Brother the Devil (2013). The character in question in that 2013 film is the titular character but didn't have the literal metaphor that is so visually resplendent here. 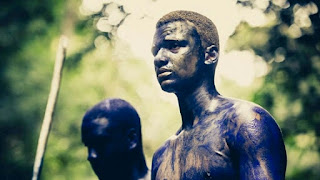 In that resplendence, Govan also echoes or reflects an idea in the recent, Oscar-winning Moonlight (2016). In that film by Barry Jenkins, a character named Juan says, "In the moonlight, black boys look blue." Govan opens her film in the daytime, but, by the end, she has a clear shot of the moon and the two, aforementioned, black boys painted blue, "running around" as Juan also said. Despite this movie arriving a year after Moonlight in the United States, this movie premiered the same year but at the Stockholm International Film Festival, so Govan couldn't have been influenced by Jenkins' film but the coincidence feels more so, as somehow Govan is tapping into the same theme, which might be more proof that whatever theme it signifies might have more truth than even Jenkins might have known.

Govan also has the sumptuousness that is Trinidad, and she finds beautiful and gorgeous locations all about the island, locations that utilize the liquid blue. Whether it's the Avocat Waterfall or Balandra Beach, the water becomes a crucial aspect of this movie that Govan renders very well. The water at the same time is so intrinsically linked to the religious themes of this movie, and how it can or cannot wash away a person's sins or even rebirth them.

Speaking of sins and rebirth, this film also had my mind connect to Kareem Mortimer's Children of God (2011), another film about the anti-gay sentiment in another of the Caribbean islands, that of the Bahamas. Mortimer's film gives more voice to the anti-gay sentiment than Govan's. Here, Govan is more subtle and she doesn't draw divisions along racial lines unlike Mortimer. 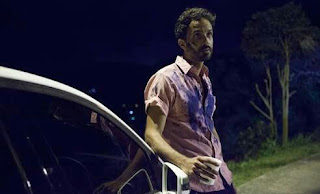 In some films, that subtlety wouldn't be enough to sell the homophobia that would drive characters to resist their same-sex attractions, but Govan conveys the religiosity here without hitting us over the head with it. Jones' performance is also very effective as the conflicted, young man holding back on his inner passions. He's aided by Akil Nicholas who plays the best friend, Devin, Nickolai Salcedo who plays the older brother, Fayne, and Penelope Spencer who plays the grandmother. It's a very well done film.

Not Rated but contains language and some mild violence.
Running Time: 1 hr. and 29 mins.