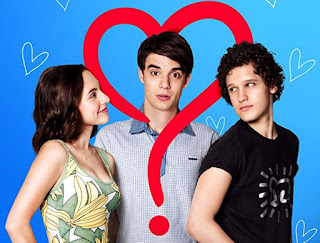 This is the movie that should have been in theaters instead of Love, Simon (2018). That Greg Berlanti film was purportedly in homage or comparable to John Hughes' films. That was perhaps a very charitable interpretation. This film, however, is more in-line with Hughes, not just in spirit but in execution. Writer-director Craig Johnson (The Skeleton Twins) crafts a more honest and true-to-life depiction of a teenage boy, a high school junior or senior struggling with his sexuality or at least being able to come out and tell his family and friends. Johnson's film is also funnier and more heartfelt in a genuine way rather than the sappy way of Berlanti's film.

It might be unfair to compare Johnson's film to Berlanti's because Berlanti's film is a book adaptation, whereas Johnson's is an original screenplay. Berlanti and his writers were perhaps beholden or wanted to be faithful to the book and its author, regardless of her having no real clue what it's like to be gay. That's what both movies are about. They're both about what it's like to be a gay male teen. Now, both Johnson and Berlanti are openly gay men. Johnson is younger and again isn't hamstrung by a book  that has other things on its mind than being an authentic look at a gay teen's experience, so I think Johnson has the advantage.

Daniel Doheny stars as Alex Truelove, the student-body president at Buchanan High School, somewhere in the suburbs of New York City. When he graduates, he hopes to go to Columbia University and major in marine biology. He's dorky, a self-described wildlife nerd. He's a good-looking kid but he's a bit tall and lanky.

Like Simon in Love, Simon, Alex has a good social group around him. Where he differs from Simon is that Alex also has a girlfriend. At the beginning of this film, Alex hasn't yet realized or admitted his same-sex attraction. Simon, however, knows he's gay from the jump, but he remains closeted. Yet, Simon has no good reason to stay in the closet. Thankfully, Johnson does give Alex a good reason, or good reasons if you count the fact that for some gay men,  the realization can just come later in life, post-puberty, if not way later. Simon's realization came pre-puberty. 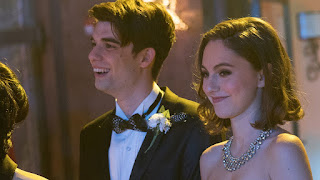 Putting aside those issues, Doheny's performance is simply better than Nick Robinson in Love, Simon. Doheny just has a more interesting face and can do more interesting expressions with it. Doheny is funnier and more charming. His character in general also just seems smarter. Other than the fact that Robinson's Simon has a car, it's not clear why Simon's friends are his friends. Doheny's Alex is such a gregarious guy that it's obvious how he could be the student-body president.

Madeline Weinstein co-stars as Claire, the aforementioned girlfriend of Alex. She's a bit of a wildlife nerd too, which is how she and Alex bonded. They met in video production class. When she's not hanging out in the local aquarium, she likes making YouTube videos. She also likes theater kids. She's equally funny and charming. She gets along great with Alex. There's only one hiccup.

Alex and Claire have been together for nearly a year if not longer and the two haven't had sex. The reason why is obvious, but Alex needs to explore and question his own feelings or what he wants. Even if this film weren't about homosexuality, it still works as a comedy about the awkward coupling that teenage sex can be. In that awkwardness, there's a lot of comedy here, better comedy than in Love, Simon. 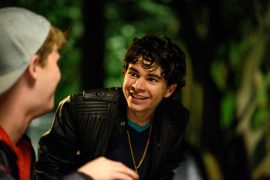 What also aides in the comedy here is a great, young, supporting cast. Daniel Zolghadri who plays Dell, the best friend of Alex, is one of those actors who instantly pops off the screen and who is a consummate scene-stealer. He comes off as crass but he shows compassion, as well as a vulnerability underneath his cocky swagger. Antonio Marziale plays Elliott, one of the pot-smoking, The B-52's loving and concert-going, theater kids with whom Alex starts to have romantic feelings. Unlike Love, Simon, there is no imagining of a same-sex relationship, Johnson actually depicts one.

One last note is that Madeline Weinstein was in a film last year called Beach Rats (2017). In that film, she also played the girlfriend of a gay teenager. This movie gives her more to do and isn't only from the point-of-view of the gay teen, the boy in both examples. This movie gives her perspective and lets us walk in her shoes. That restricted P.O.V. isn't a bad thing, but it's simply nicer to see multiple points of view here in what feels like a more genuine teen story.