A gringo is what people who speak Spanish call someone who isn't Hispanic or Latino. There is no direct translation for it. Gringo is simply a kind of slang term and a rather derogatory term for anyone who is a foreigner. Typically, it refers to someone from the United States who is ignorant of the language and culture, a dumb American as it were or a Yankee, mostly someone Anglo-Saxon or Caucasian and usually blonde, but now it's a catch-all word that could refer to a black person who doesn't speak Spanish, which is the case here.

Yet, I'm not sure what Anthony Tambakis (Warrior) and Matthew Stone (Soul Men) were trying to say with this screenplay. The title might be something that was simply slapped on without having any real meaning, but to use that term suggests a point-of-view from the Mexican perspective, which this film isn't. It does, however, also suggest an idea about Americans and American interactions with Mexico that is more supported here. Those interactions are ones of ignorance by Americans about Spanish or Mexican culture, despite using, manipulating and in fact stepping on that culture.

Otherwise, this film becomes nothing more than a farcical or comical, crime caper that trades on the stereotype that Mexico is nothing but a cesspool for drug trafficking that Americans are going to try to exploit but get in way over their heads. One of the films on which Stone worked was Intolerable Cruelty (2003), a film directed by Joel and Ethan Coen. In that regard, it's possible to see how the intention for this film would be to mimic a Coen brothers movie, which often are comical, crime stories. 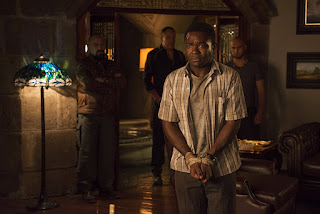 If anything, this is weak Coen brothers film. Tambakis and Stone attempt to mimic the Coens but come up short. The comedy as written is nowhere near as strong as a Coen brothers-directed film would be, even compared against to the Coen's least successful work. The story and characters are rather sloppily rendered. The movie does have funny persons in this narrative but they're perhaps not juggled in the best way.

David Oyelowo (Selma and Red Tails) stars as Harold Soyinka, a Nigerian immigrant in Chicago who works as operations supervisor at Promethium Pharmaceutical, a multinational drug company. The irony is that he's not fluent in Spanish but he does know a little and he has respect for the Mexican employees with whom he meets and interacts, yet he's still called gringo. What he doesn't know is that his company is involved with a drug cartel in Mexico. When the company tries to cut ties with the cartel, the cartel leader wants to capture Harold because it's rather wrongly assumed that he's the ultimate boss.

Charlize Theron (Hancock and Mad Max: Fury Road) co-stars as Elaine Markinson and Joel Edgerton (Warrior and It Comes At Night) also co-stars as Richard Rusk. Richard and Elaine are co-presidents of Promethium Pharmaceutical. They know about the drug cartel connection. They try to stop it because the company is about to go through a merger and don't need that baggage. The merger will also mean people will lose jobs, including Harold. Neither Richard or Elaine care about Harold nor about the Mexican employees who are more at the mercy of the cartel leader. Theron is funny as this arrogant, narcissistic and tough woman. Edgerton is okay as a philandering, self-centered jerk, but oddly we don't get enough of him. 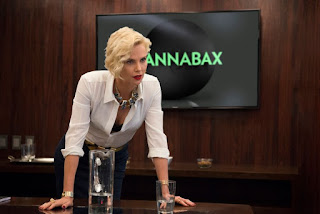 There is a whole subplot involving Richard having an affair with a married woman. The point is to show how much a jerk he is, but by the end, it's meant to be an indictment on the friendship between Richard and Harold. The movie doesn't establish well why Harold would be so myopic as not to see that his friendship with Richard isn't anything real. Oyelowo is a great actor but even he can't sell the disillusion of that friendship.

Thandie Newton (Westworld and Crash) plays the aforementioned, married woman. She's wasted though as her affair is never explored or fully developed. Why she leaves her husband and why she hooks up with Richard are just plot points that get no real depth. Amanda Seyfried (Mamma Mia! and Mean Girls) also plays a wasted character. She's basically a tag-along who only provides padding to this movie's run-time.

There is a kernel of a good idea here. Harold fakes his own kidnapping and pretends the cartel is holding him for a ransom. Spoiler alert, the twist is that the cartel ends up kidnapping him for real. The problem is that Richard and Elaine are too detached from that plot, mainly because they're ruthless, even in varying degrees, but also because geographically they're far away. The kidnapping plot just doesn't hold any kind of water. The filmmakers try to make it hold water with the introduction of a character played by Sharlto Copley (District 9 and Free Fire) but the whole thing ultimately gets lost in a sea of "who cares?".