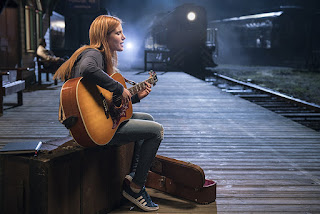 This movie is very reminiscent of Everything, Everything (2017), but I actually think this film is a little better, though still problematic. This movie is a remake of a 2006 Japanese film, written by Kenji Bando. It's about a teenage girl who suffers from Xeroderma Pigmentosum or XP, which is a deadly allergic reaction to sunlight. If the girl is exposed to sunlight, she could literally die. XP is a real condition, so in this movie, the girl has to spend all day in the house behind tinted windows. She can go out at night, but as an underage girl, there isn't much for her to do after hours, so her whole life is spent indoors. Her mother died in a car crash, and she has no siblings, so her single father is her only companion. She does have a best friend who visits, but she has no one else and her father home-schools her. Other than that, she does play the guitar and aspires to be a singer.

In Everything, Everything, the girl didn't have XP, but she was told that she had extreme allergies that could kill her if she went outside, so she also spends her whole life locked inside her single parent's house like some tragic, Disney princess. What that movie had working against it is that it didn't have the courage to deal with her illness in a honest way. It also makes the assumption by the end that happiness is only possible if she didn't have the illness, which isn't true, despite it being what some people might feel. However, ultimately that 2017 film was less about the illness affecting her but more about a mental illness affecting her mom. This movie though does make itself about the illness affecting the teen girl and its real consequences on those in her life.

Bella Thorne (The DUFF and You Get Me) stars as Katie Price, the girl with XP. Kids initially call her a vampire, despite not knowing her exact condition. Calling her a mogwai from Gremlins (1984) might also be appropriate. From her bedroom window, she watches other teens go by. She notices one teenage boy in particular on whom she develops a crush. Her crush started in elementary school and now she's graduated from high school or the equivalent from her father's home-schooling, yet she's never talked to this boy.

Unlike Everything, Everything, this movie is very sexless and Katie feels very disconnected from the Internet. For a girl who has to spend all day in her house and who has a passion for performing, it seems odd that she wouldn't have her own YouTube channel or some kind of blog where she can express herself or communicate with people not only about her art but about her condition. She has a shtick that she doesn't want pity or sympathy, but her best friend, Morgan, played by Quinn Shephard, doesn't treat her with pity or sympathy, so it seems odd that she would still take that position. 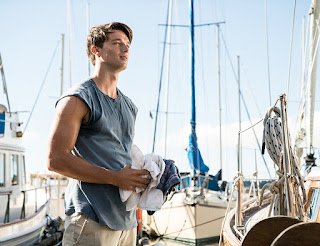 Patrick Schwarzenegger co-stars as Charlie Reed, an athletic swimmer who injured himself and doesn't swim any more, but he's encouraged to get back in the pool in order to earn a scholarship for college. Besides that, he's into skateboarding and sailing. He's actually working on a sailboat or mini-yacht. He's a jock but doesn't act like a jerk. He does hang out with friends at parties, gets drunk and does dumb things, but his injury has calmed him down. He's cool, sweet and polite.

Schwarzenegger isn't quite Nick Robinson who co-starred in Everything, Everything. His performance and his character aren't like Robinson's. Charlie isn't dealing with the same hardships in his home life as Robinson's character, so Charlie can be a brighter and more charming presence, as opposed to Robinson who comes off as more smug over whatever suaveness. Charlie, however, is too much of a gentleman and a sweetheart.

He actually has a lot in common with Scott Eastwood in The Longest Ride (2015). Scott Eastwood is obviously the son of a famous Hollywood, conservative, uber-masculine personality. The Longest Ride was the first, lead role for Scott Eastwood, and it was him as a romantic object for teen to college-age girls playing off the appeal of old-fashioned ideas embodied at times by his famous father. This movie does the same thing for Patrick Schwarzenegger. It's not based on a Nicholas Sparks book but feels like it could have been. Unfortunately, the love connection between Katie and Charlie never really soars as it should and doesn't even approach The Longest Ride, or Everything, Everything, which didn't have much chemistry for its leads either.

Rob Riggle, on the other hand, co-stars as Jack Price, the father to Katie. Riggle is the true surprise in this film. This is perhaps Riggle's first dramatic role. He's been in the business for 20 years and he's mostly done comedy, if only comedy. Riggle began on Upright Citizens Brigade and Saturday Night Live, and usually he's loud and goofy at times in aggressive ways. Here, he's more reserved and contemplative. He's even brought to tears at one point and it's effective. He's so good that he evoked tears from the audience. It's a shockingly great performance of a father protecting and loving his daughter. 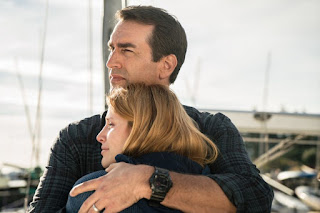 Katie's romance with Charlie is meant to be the draw and driving force to this film, but what ends up being the standout relationship is Katie with her dad, Jack. Not to spoil too much, but the ending to this reminded me of the ending to Return of the Jedi (1983). There is an equivalent moment here to Darth Vader telling Luke Skywalker to take his mask off, and it was effective in making me lachrymose.

Rated PG-13 for some teen partying and sensuality.
Running Time: 1 hr. and 31 mins.