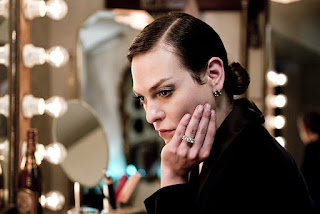 This is the first film from Chile to win Best Foreign Language Film at the Oscars, which it did at this year's 90th Academy Awards. It's only the second film to be nominated from Chile, which has submitted only 22 films since 1990. The film premiered at the 67th Berlin International Film Festival where it won the Silver Bear for Best Screenplay and the Teddy Award, which is given to Berlinale's best LGBT film. It also won the GLAAD Media Award for Outstanding Film - Limited Release. It scored Best International Film at the Independent Spirit Awards. It was directed by Sebastián Lelio whose previous film Gloria (2013) was also submitted by Chile to the 86th Academy Awards. Gloria didn't get the nomination, but it was one of the best movies I'd seen that year. This is yet another great, little movie that follows a female character as she experiences a challenging time in terms of trying to live her life with external forces weighing her down.

Daniela Vega stars as Marina Vidal, a transgender woman living in Santiago. She works as a waitress during the day and at night, she's a lounge performer, though she's taking vocal lessons because she aspires to be an opera singer. As such, her voice is very important to her, which is why it's interesting that this movie in various ways is about how people and circumstances strive to take away her voice or her ability to express herself or be herself in certain situations. One's voice and one's breathing both come through the lungs, which is why both can seem connected and none so more than here as Lelio focuses particularly on Marina's breathing. The sound and emotion of her breath are featured prominently in this film and on its soundtrack.

On Marina's birthday, her 57-year-old lover dies suddenly, and suddenly a whole lot of homophobia and transphobia that were kept at bay is thrust upon her. The first round comes from the police and the authorities investigating the death. The second round comes from her lover's family. If one has seen Linda Bloodworth-Thomason's Bridegroom (2013), this movie's central conflict is selfsame to that documentary. Lelio's film goes further in showing how a transgender person can be not only denied but also degraded. 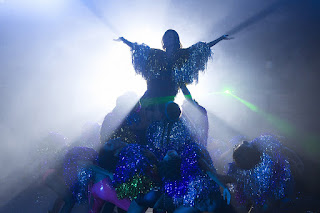 It may seem extreme, but a transgender person is assumed to be a liar and literally can have everything stripped away. Lelio depicts the challenge she faces in a scene of walking in an increasingly strong, wind storm. There are a couple of sequences  that are more metaphor and that visually depict what Marina is feeling rather than through dialogue or simply through the look on her face, which is effective as Vega gives a tremendous performance. One such sequence though includes a near seamless transition into a dance number, one of the most seamless transitions visually and musically that I've ever seen, even in films that are ostensibly whole musicals.

The film exposes the bigotry against transgender people. It can seem a bit depressing, but the power is in Marina's strength and endurance. The way she handles the bigotries is probably what makes her fantastic and more so than any one with fantastic attached to their names, including Captain Fantastic, the Fantastic Mr. Fox and the Fantastic Four. Here, Marina is more fantastic than all of them.