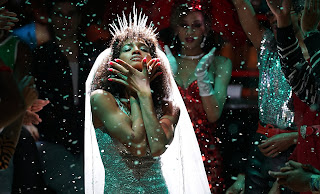 Ryan Murphy is now known for The People Vs. O. J. Simpson, which swept the Emmys a couple of years ago. He's also known for American Horror Story, but he first made a name for himself with Glee, the musical comedy series on FOX about a high school singing club. If any comparison to a Murphy property can be made, this series could be compared to Glee. The milieu isn't a Midwestern high school, it's instead the streets of New York City in 1987. Ostensibly, it's an adaptation of Jennie Livingston's Paris Is Burning (1990), which was an in-depth look or exposé of New York City's Ball culture, the community of black and Latino, LGBT people pre-9/11. Nearly 30 years later, Murphy and his co-creators, Brad Falchuk and Steven Canals, take us back into that world and into all the issues of that time. Some of which have eerie parallels to today.

Evan Peters (American Animals and X-Men: Days of Future Past) stars as Stan Bowes, an aspiring business executive from New Jersey. He goes to work at Trump Tower. Kate Mara (The Martian and Fantastic Four) co-stars as Patty, the wife of Stan and mother to their two children. They have a pretty, ordinary life, but both want more. Stan's job is his chance to rise and have more. James Van Der Beek (CSI: Cyber and Dawson's Creek) also co-stars as Matt Bromley, the boss or immediate supervisor of Stan at Trump Tower. He's rich. He sniffs cocaine in his office, but, despite being a jerk, Stan wants to be just like Matt.

At least, he says he does, but in reality it's an act. In reality, when Stan drives into the city, he takes the opportunity to drive over to the docks by the river or the piers downtown. There, he likes to pick up transsexual or transgender women, specifically one trans-woman. He doesn't want to give up his nice, suburban life in Jersey, but spending time with the trans-woman does fulfill some need in him. That need, however, isn't sexual. He doesn't even kiss the trans-woman. He literally just wants to spend time with her.

Transgender people though are the real focus of this series. Yes, Stan and his issues are a significant percentage of this show, but it stands only as a counterpoint or contrast to the poverty that transgender people face, as well as the privilege that they don't have. Even 30 years since, they still don't have much of any privilege. This series therefore goes into the discrimination and bigotry that transgender people experience. In Episode 2, we see some of that discrimination, but surprisingly, it's not from straight or heterosexual people.

LGBT is supposed to be an inclusive term for lesbian, gay, bisexual and transgender. However, LGBT as a term wasn't regularly used 30 years ago. The reason is because trans-people or the "T" weren't always made to feel inclusive among the L, the G or the B. Many trans-women were misidentified as drag queens and called men in makeup or dress-up, which wasn't the case, and as Episode 2 showcases, the people doing the misidentifying were gay men, particularly white, gay men. If you were a trans-woman of color, the discrimination was twofold, and this series doesn't shy away from that. 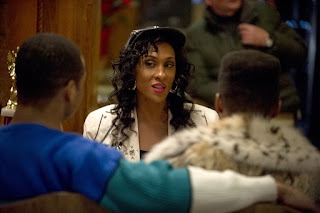 MJ Rodriguez (Saturday Church) stars as Blanca Rodriguez, a transgender woman who is Latina. She works at a nail salon. She's also HIV positive. She thinks it's a death sentence, but she has a dream to leave a legacy before she dies. She attempts to have drinks at a gay bar that is predominantly white men and she is literally kicked out because the men there don't want a woman in their bar or around them. It might seem over-the-top or ridiculous, but it's emblematic of what trans-people of color go through. It's why Ball culture developed because LGBT people of color felt they weren't welcome in spaces by white LGBT people. As a result, Blanca goes to what's called a "ball."

A "ball" is simply a party where black and Latino, LGBT people gather, and they compete for trophies or other prizes. The events are walking a catwalk, similar to what fashion models do. They're judged mainly on looks and movement. These competitions are what make this series comparable to Glee. Every episode of Glee would feature singing competitions. The competitions allowed us to get to know the characters. It's the same here, but it's a little bit more expansive, or it has the potential to be.

Often times, like in Glee, groups will compete against each other. The groups are called "Houses." They're called houses because in many cases the members of the groups all live together in one house or apartment. This is because a lot of the minority LGBT people are homeless, usually kicked out of their parents' place and forced to live on the streets. Some are able to get jobs like Blanca at the nail salon or hustle money in some way like Lil Papi, played by Angel Bismark Curiel, who sells drugs, but whatever they have, it still usually requires groups of people to pool together their finances in order to afford a roof over their heads. In the nicest sense, it could be seen as like a sorority or frat house. 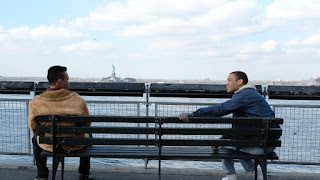 Ryan Jamaal Swain also stars as Damon Richards, an aspiring dancer whose father kicks him out his Allentown, Pennsylvania residence for being gay. Damon then journeys to Manhattan, hoping to attend the New School. He sleeps on park benches until Blanca takes him in. She also takes in Damon's boyfriend Ricky, played by Dyllon Burnside, who's also homeless. For relatively new actors, Murphy gets great performances out of these young, beautiful actors who convey the desperation and rejection they face but also how that forms the basis of a makeshift family that's stronger than any biological connections they had.

What's interesting though is the show is always a debate over whether Ball culture is as significant as it seems to be or if it's just superficial primping. The tug-of-war occurs with Damon because some might believe, unlike Glee, there is no talent to the Ball competitions. In Episode 3, Damon tries to inject some choreography into it. Otherwise, it's just walking. The people have to wear certain clothes, but it's not as if the people are designing the clothes themselves. Pray Tell, played by Billy Porter, the Tony Award winner for Kinky Boots, designs some clothes for people, but he himself never walks. The opening sequence in Episode 1 is clothes being stolen. It's a fantastic sequence, which leads to a moment that could be tantamount to how in Glee, the kids always did covers of pop songs where original ideas are eschewed for simply copying or stealing some other's work.

Here, however, stealing is a necessity for survival. It's not done simply for sport or out of laziness, but Glee had at times a more subversive quality because the performances were always for an audience whose ideals might not align. When Finn Hudson, played by Cory Monteith, joined the glee club, he was the school quarterback, the jock who had his conservative, machismo world collide with the liberal, nerdy, queer world that was the glee club. Here, the subversion is insulated within the Ball culture itself. Everything so far happens in an echo chamber, preaching to the choir as it were. Hopefully, we'll see more activism on the part of Blanca for more trans-visibility and rights outside Ball culture. 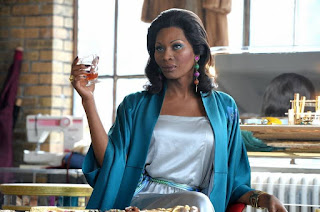 But, in the meantime, the show can stay insular as we explore the intra-family dynamics of the various characters we've met thus far, as well as the various issues that gay and trans-people of color face. Dominique Jackson plays Elektra Abundance, the elder house-mother who is considering re-assignment surgery, and Indya Moore (Saturday Church) plays Angel, the younger member who has to be a sex-worker in order to survive but who develops feelings for Stan, one of her so-called "clients."

These are issues facing the LGBT community and it's good that this series dives right into them. I also appreciate the use of music of that time like Chaka Khan and Janet Jackson. However, the first episode features an incredible sequence set to Whitney Houston's "I Wanna Dance With Somebody" that absolutely blew me away.