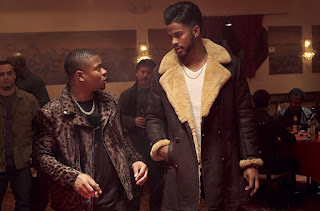 This is a remake of the 1972 Blaxploitation film about a cocaine dealer trying to get out of the crime business. This remake is itself a Blaxploitation flick, a genre that's making a comeback. The comeback in part is fueled by black film producer, Will Packer. We did get a Blaxploitation flick earlier this year that wasn't produced by Packer called Proud Mary (2018), but it was released by Sony Pictures, which mostly is Packer's frequent distributor. Proud Mary is also about a black criminal trying to get out of the crime business. The difference is that in Proud Mary, the character is doing it for less selfish reasons than the protagonist in this movie. Proud Mary is also slightly removed from comparisons to Blaxploitation because there isn't much commentary on race relations, as there is here. This movie could also be seen as an outgrowth of the Black Lives Matter movement.

Trevor Jackson (Grown-ish and American Crime) stars as Youngblood Priest, a drug dealer, not in Harlem, but in Atlanta who plots to get out of the crime business but not before scoring a whole bunch of money first. In 1972, Ron O'Neal played the role of Youngblood Priest, here just called "Priest," but O'Neal was in his mid-thirties. Jackson is only 21. He's arguably too young for the role. What we're supposed to gather is that Priest is jaded, having grown tired of the illegal activity and fearful of what it might bring.


Priest says that he's been in this criminal life, since he was 11, which if his character is Jackson's actual age, then that could account for it. However, there's a moment when Priest comes out of a strip club and laments not being young enough to enjoy the club as he wants or should, and knowing Jackson's actual age, that line of dialogue doesn't fly. I suppose Jackson is meant to be playing older than he really is, but he doesn't pull it off, even if he has a very well-coifed beard. It also doesn't help that references like one to Morris Day go over his head, even if it's meant to just be a joke. 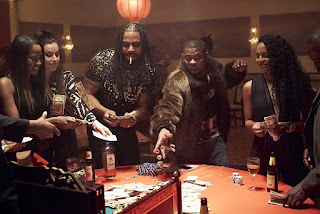 In terms of films of this sort, it's not meant to be the condemnation that Scarface (1983), New Jack City (1991) or even American Gangster (2007) is. Arguably, it's a glorification of that criminal life, the money and even the violence. Yes, a couple of loved ones get killed along the way, but the ending suggests that Priest's criminal acts are fine because by the end, he was able to take out even greater criminals or exact revenge or justice to corrupt people among the police.

Whether or not that redeems him is debatable. The movie goes out of its way to show that Priest isn't a killer. He in fact is trained in jujitsu, a martial art that he uses instead of guns to take out opponents. Even in a shootout, we see Priest only shoot because he's being shot at. His position is always defensive. What can't be denied is that he's a drug dealer or oversees other drug dealers that can't measure the lives they've destroyed through the cocaine they've peddled, although one could argue that nobody forced those people to buy drugs.

The thrust of the screenplay by Alex Tse is watching Priest navigate his way up the ladder past bigger drug lords than him, as well as past two very corrupt cops, and then outsmart them. At the same time, he has a rival drug gang trying to kill him. It is somewhat interesting to see this guy do so, mostly by talking his way out or through crazy and intense situations. His brain is what's strong. It's not his brawn, even though his martial art skills are certainly underlined.

However, the movie doesn't do enough to make us care about Priest, enough that his successes are worthy of celebration. Proud Mary had the protagonist ultimately acting selflessly or to rescue an innocent child. The protagonist here acts mostly out of ambition and greed, as well as his own self-interests. It's not to say that a movie can't be about despicable or simply nefarious people, but it helps if there is some kind of emotional anchor. This movie doesn't quite have it. 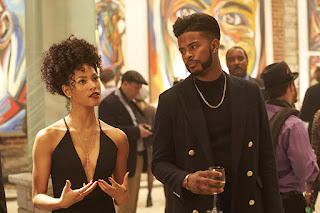 Tse tries to have an emotional anchor through Priest's relationships with the two women in his life. Lex Scott Davis (Toni Braxton: Unbreak My Heart) plays Georgia, and Andrea Londo (Narcos) plays Cynthia. We're introduced to these women, kissing each other in the strip club. There is a very extended sex scene between them having a threesome with Priest. Later, all we get is that when danger gets near, Georgia wants to leave and Cynthia wants to stay and fight. There is a great scene where they're arguing that gives insight into their relationship. Both women also give great performances. Unfortunately, Tse's script doesn't reveal enough about them to make that possible emotional anchor work.

The only thing left is that aforementioned outgrowth of Black Lives Matter. For years now, the social media movement has spotlighted instances of unarmed black men killed unnecessarily by police or else been the victims of police brutality. A film like this showcases that brutality. This film also provides the platform to push back against that brutality, particularly in one scene that probably plays more cathartic for those proponents of Black Lives Matter.