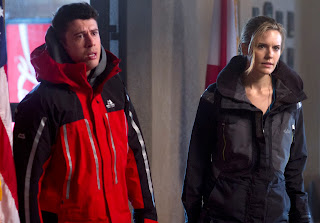 Toby Kebbell (Ben-Hur and Dawn of the Planet of the Apes) stars as Will Rutledge, a meteorologist who works in the field studying the physical effects from weather patterns. He has a mobile, weather-tracking and weather-surviving unit in the form of a tank. A Tropical Storm named Tammy is about to hit the coast of Alabama and his home-town, which he hasn't seen in five years, so he goes to check on the place and to check on his older brother. He's also a good ole boy, a Southern gentleman, but he's very smart.

Ryan Kwanten (True Blood and Home and Away) co-stars as Breeze Rutledge, a mechanic who owns and runs his father's tow-and-repair shop. He's a former, football star, a quarterback and a military veteran who toured in Afghanistan. Now, he's a bit of lush and a womanizer, but he's a good guy deep down or not so deep down. He simply has some issues with his younger brother.

If one knows The Fast and the Furious movies, Will and Breeze could be compared to any number of the cast members, most notably either Vin Diesel and Paul Walker's characters. However, those characters built their brotherhood on screen, which we don't get here. Will and Breeze are already brothers whose relationship is supposed to be pre-established, but unfortunately the two don't get enough screen-time together to make us feel their brotherly bond. If anything, Will and Breeze mimic the relationship between Vin Diesel and Michelle Rodriguez's characters in The Fast and the Furious. 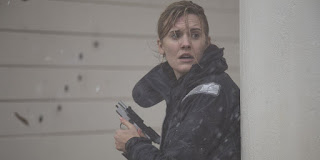 Maggie Grace (Taken and Lost) also stars as Casey Corbin, an agent with the U.S. Department of Treasury but who is trained like a FBI agent. In some ways, she's the equivalent of Paul Walker's character. Yet, she's even more bad-ass than Walker was. Many critics compare the most recent sequels of The Fast and the Furious to comic-book movies, and compare the main characters to super-heroes. Casey would certainly be closer to that description. She's mostly paired with Will whose more the brains, whereas Casey is the braun. Now, I'm not arguing that she shouldn't have been in this movie, but it would have made more sense if she wasn't and every scene involving her had Breeze instead. It's not that I wish the two should have swapped places, but Cohen's movie is arguably about these two brothers, yet their screen time is too low to justify that.

Ralph Ineson (The Witch and Harry Potter and the Deathly Hallows) also co-stars as Connor Perkins, the Irish leader of the criminals who come to the Treasury facility in Alabama that houses millions of dollars in cash. Connor wants to rob the cash before it's shredded in a plan similar to the one in both Logan Lucky (2017) and Den of Thieves (2018). The scheme here is obviously a million times more ridiculous, but that's actually why it's more fun.

It is ridiculous. It's silly. It's over-the-top, but not more so than The Fate of the Furious (2017) or even Furious 7 (2015). Cohen and his cast embrace the over-the-top nature and have a ball with it. It's not always but in this case that translates through the screen and allows the audience to have a ball too.