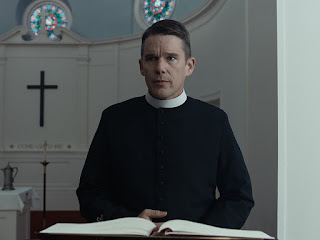 Filmmaker Paul Schrader is best known for writing Taxi Driver (1976) and a lot of comparisons have been made to that Martin Scorsese directed work. This film is similar in its depiction of a lonely man, driven by his own righteousness to extreme and possibly violent acts. However, the tone and the setting puts this movie more in-line with Schrader's Affliction (1997). Instead of alcoholism, leading to domestic abuse, this movie has alcoholism mixed with environmentalism leading to religious or spiritual confusion and possibly terrorism. Both this and Affliction are set in the northeast in small New England towns and both prominently feature funerals. Both center on a middle-age, white man having a mental breakdown or maybe it could be argued here that he's having a mental breakthrough.

Ethan Hawke (Boyhood and Training Day) stars as Reverend Toller, the head of First Reformed Church in Snowbridge, New York, somewhere near Albany. Toller has a small congregation. During his Sunday sermons, he's lucky if ten people attend. Most of his parishioners have gone over to the megachurch known as Abundant Life, which has a huge, modern space for 5,000 people and technology like huge TV monitors in an almost concert-like space. Toller's church is a small, simple historical church. He had a wife and adult son, but now he lives a very lonely life in the unfurnished, tiny house next to the church.

Amanda Seyfried (Les Misérables and Mamma Mia!) co-stars as Mary, a young, married parishioner who approaches the reverend one day after a sermon. She's pregnant and she's worried about what her husband has been saying about their baby's future. She asks the reverend to meet with her husband, so Toller does. 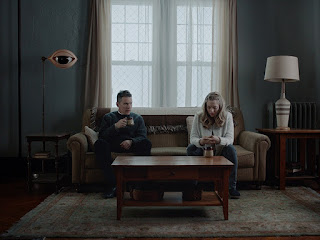 What Toller learns is that Mary's husband, Michael, is depressed about climate change aka global warming. Michael thinks that the worse predictions about climate change are going to come true and within his life-time, meaning catastrophic and irrevocable damage to the planet. Therefore, Michael feels that bringing a baby into this world is wrong and he doesn't want to do it. Toller tries to counsel Michael and make him see hope over despair, but Michael is too depressed and isn't as spiritual as Toller or Mary.

At the same time, Toller meets with the pastor of Abundant Life who is helping him to plan what's called the Re-Consecration, which seems to be a celebration of the 250th anniversary of First Reformed Church. However, Toller discovers that Abundant Life is in league with Balq Industries, a corporation that has pollution issues, which are contributing to climate change. This bothers Toller and like folie à deux, Toller starts to take on Michael's cause and his point-of-view almost to deadly extremes.

Given his loneliness, his drinking problem, his health issues and his annoyance about church issues, it's easy to see how Toller could adopt Michael's political cause, but it's a little ridiculous where it goes. It's silly actually. This movie's last act and last few minutes are silly. Maybe, it's Schrader's attempt at dark comedy, but I didn't get it. I simply didn't buy Toller's motivations in those final moments. Everything leading up to it though is pretty incredible, starting with Hawke's performance. Yet, Hawke's constant narration is unnecessary. Yes, it's supposed to provide insight into Toller's mental breakdown or his psychic spiral, but Hawke's face and his eyes convey everything that makes the voice-over only seem redundant. 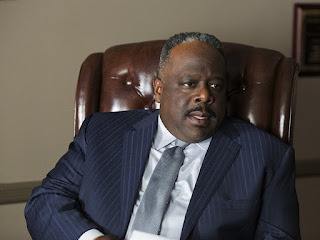 Schrader seems to be aware of that. Schrader does shoot this film in Academy ratio, which means that it's not in the 1.85:1 ratio that is standard for widescreen cinema. He does have a lot of wide shots where the camera is primarily on sticks with only slight pans left or right, and it's a way of immersing the audience in the moment by controlling the pace and space of a scene. However, Schrader has a significant amount of close-ups of Hawke's face, as if to get into his head, and those shots are effective in and of themselves. The narration therefore is too extra and distracts more than it contextualizes.

Cedric the Entertainer (The Soul Man and The Steve Harvey Show) also co-stars as Joel Jeffers, the pastor at Abundant Life. He's also great as a more corporate businessman than a pastor. He seems to care more about the bottom line than anything environmental. He has some compassion, but maintaining the status quo and those in power appears to be his chief concern.